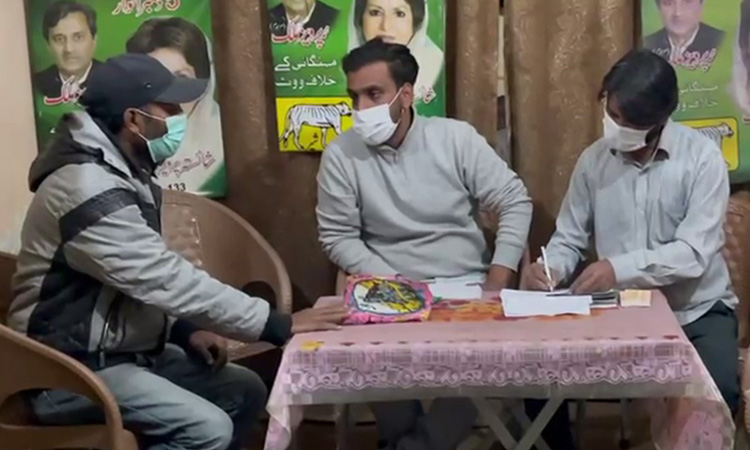 The Election Commission of Pakistan (ECP) has taken notice of a viral video purportedly showing voters in Lahore’s NA-133 constituency being given bribe ahead of the by-polls.

The by-elections, being held after the death of PML-N Lahore chapter’s central leader Pervez Malik, are scheduled for December 5. On Sunday, Returning Officer Syed Basit Ali wrote separate letters to the Punjab Police chief, National Database and Registration Authority (NADRA), Lahore deputy commissioner and the Pakistan Electronic Media Regulatory Authority (PEMRA), drawing attention to the footage and seeking more information about the persons seen in the video clips in order to take action against them.

According to the letters, the videos show people standing in long queues and others noting their CNIC numbers. Behind the scene discussions give an impression that voters’ credentials are being noted for buying their votes by paying them some amounts in cash,” the letter states, adding that some pictures and banners of contesting candidates can also be seen in the background.

In his letter to the Punjab IGP, RO Ali ordered police to carry out forensic analyses of the videos in order to ascertain their authenticity as well as their origin. The letter also directed the police to identify the people visible in the footage and arrest them, while also identifying the building where the activity was taking place. In a separate letter to the NADRA chairman, the returning officer sought help in identifying the persons seen in the clips. Meanwhile, a letter addressed to the Lahore DC also directed the authorities to identify the individuals and the building seen in the footage in order to aid the ECP in its investigation into the incident.

A fourth letter to the PEMRA chairman also ordered that the authority conduct forensic analyses of the clips, which were also aired on mainstream media.

The leaked video triggered a war of words between the opposition and ruling party with PML-N accusing PPP of buying loyalties of their voters.

“PPP should stop luring people ahead of the by-elections which they cannot win,” PML-N leader Ali Pervez Malik said in a tweet.

PPP central Punjab’s general secretary Syed Hasan Murtaza hit back at PML-N, saying “the PML-N is paying respect to money instead of vote in NA-133 elections”.

He added that his party will compete with PML-N in the by-poll through “its ideology instead of using money”. Ruling PTI Senator Ejaz Chaudhry in a tweet said that the dubious video had “exposed the true face of the PML-N”.

“This is why they [PML-N] are against EVMs (electronic voting machines),” he added.

Earlier this month, the ECP had said that no proposal was under consideration to postpone the NA-133, Lahore by-election.

An ECP spokesperson said in a statement that the by-election would be held in NA-133 on December 5, as per schedule. However, “if the situation changes, the ECP may take further action in this regard”, he concluded. The Punjab Home Department had written a letter to the ECP for the postponement of NA-133 by-election, citing security situation as the reason. PML-N’s Muhammad Arif registered a complaint with the Election Commission of Pakistan (ECP) stating that the PPP is “buying off votes in the constituency”.

Arif alleged that the PPP is taking oath from the “bought” voters and distributing Rs 2,000 per person.

PML-N’s Ali Pervez Malik also appeared on video to speak about the matter. He said he condemns the move and hopes that PPP will take notice of such ongoings and put a stop to them immediately.

“This fake video, in which all the characters are masked, this attempt to launch a campaign (against PML-N), has been rejected by the people of Lahore,” he said.

He said in the 2018 election, Malik Pervez won with 90,000 votes and the “tactics” being employed by PPP come from a party who “did not even secure a tenth of the votes of PML-N’.

Meanwhile, PPP Punjab’s secretary information Shahzad Cheema noted that such videos are doing the rounds on the social media, saying that “the clips are being made to go viral by both parties”.

He claimed his party had not issued directives to anyone to give any entity any money. “If this has occurred at any level, the PPP strongly condemns the act,” he said.