Sec 144 imposed as demolition of Nasla Tower goes on 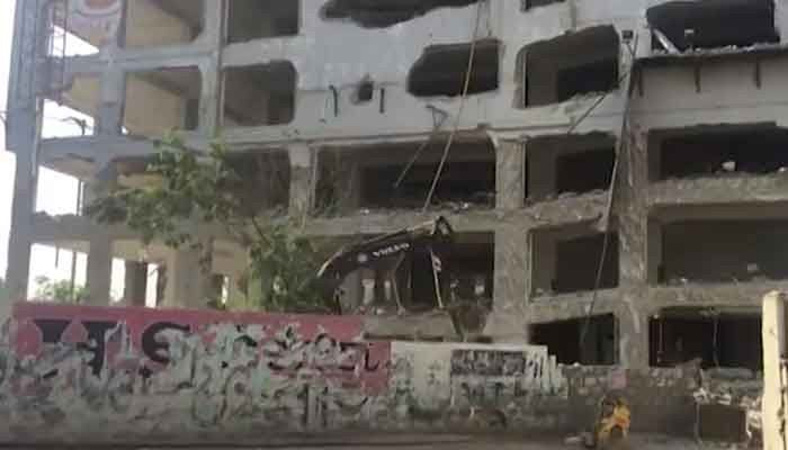 As work on demolition of Nasla Tower on Karachi’s Sharah-e-Faisal continues in accordance with an order of the Supreme Court, authorities Sunday imposed Section 144 in the area to prevent any untoward incident. Section 144 was imposed on the directives of the commissioner.

“Legal action will be taken against people found interfering in the demolition work of Nasla Tower,” the notification said.

On the other hand, the contractor responsible for the demolition work said in order to tear down the building, labourers were working 24 hours a day in three different shifts.

“We are making sure no casualties happen during the demolition of the building,” he said. The Supreme Court (SC) has ordered the Karachi commissioner to double the number of labourers and demolish the Nasla Tower within one week. A three-member larger bench, headed by Chief Justice Gulzar Ahmed, heard important cases at the SC Karachi Registry.

In its written orders, the apex court directed the commissioner to double the number of labourers from 200 to 400 to demolish the Nasla Tower within a week and set a time-frame of 20 days to demolish Tejori Heights.

Earlier, the Chairman of the Association of Builders and Developers (ABAD), Mohsin Shaikhani said the chief minister and chief secretary should be held responsible for the state of affairs and urged them to sit with them and collectively take steps for the improvement of Karachi.

On Friday, Sindh Information Minister Saeed Ghani demanded that those who were responsible for issuing the construction permits for the Nasla Tower building should be held responsible and punished.

He had called on the courts to hand exemplary punishments to those responsible for the construction of the tower rather than those who were residing in it.

“I don’t think they [Nasla Tower families] are even 1% responsible. When they bought flats or shops there, I am sure they must have checked all the SBCA approvals and maps before doing so,” he had added.