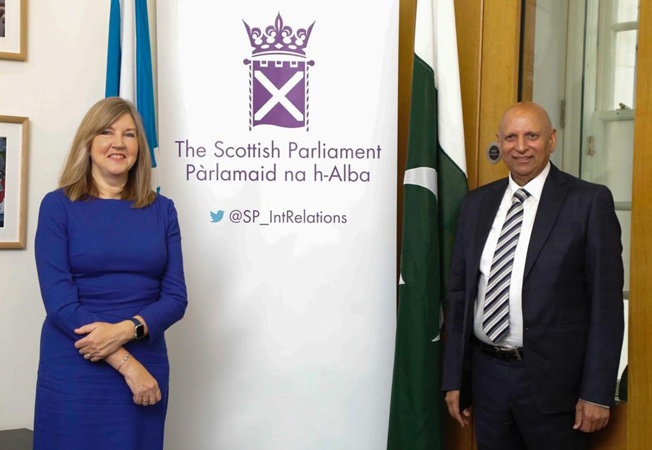 Punjab Governor Chaudhry Mohammad Sarwar has said that if world does not pay attention towards Afghanistan, problems like terrorism and food security will get out of control, therefore international community must focus this war-torn country.

The Muslim Ummah must come on the same page to eradicate phenomenon of Islamophobia. The efforts to promote religious harmony in Pakistan are unprecedented in the world. “We are ensuring the protection of life and property of all minorities living in Pakistan in accordance with the vision of Quaid-e-Azam Muhammad Ali Jinnah,” he added.

According to a spokesman for the Governor House here Sunday, the Governor expressed these views while talking to the Speaker of Scottish Parliament Alison Johnstone and delegation of Overseas Pakistanis during his visit to United Kingdom.

Scottish Parliament Speaker Alison Johnstone also appreciated the steps taken by Pakistan under the leadership of Prime Minister Imran Khan to bring peace in the entire region and Afghanistan.

Governor said that the situation in Afghanistan is deteriorating with each passing day. Today, the Afghan government does not even have the money to pay salaries to their employees and to provide medicine in hospitals. Under such circumstances, life is becoming more difficult for the common man. Such conditions are by no means are in the interest of the world because when the situation in Afghanistan deteriorates, other terrorist organizations will become more active. The effects of terrorism in Afghanistan will be felt not only in Afghanistan or Pakistan but also in the entire region and the world. Therefore, the world should take immediate notice of the whole situation. Chaudhry Mohammad Sarwar said that Pakistan has been playing its role in good faith for the solution of Afghanistan’s problems since day one. Even today Pakistan has more than four millions Afghan refugees. The time has come for the world to fulfill its responsibility to save human lives in Afghanistan because later on, the world will have nothing but regret. Governor Punjab Chaudhry Mohammad Sarwar, in a meeting overseas Pakistanis, said that overseas Pakistanis have a major role in Pakistan’s economic development and stability. The PTI government has not only given the right to vote to overseas Pakistanis as promised but has also been working to provide more facilities to them. Pakistanis living across the world should participate in the politics of the respective countries they live in as much as possible so that they can also help to solve the problems of overseas Pakistanis living there.