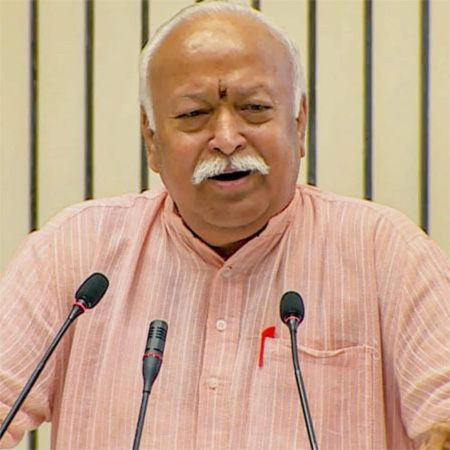 The Ministry of Foreign Office (MoFA) Saturday slammed RSS chief Mohan Bhagwat’s recent statement in which he called for the ‘undoing’ of the 1947 Partition.

In a statement, the Foreign Office said that this is not the first time that the RSS chief has publicly indulged in such delusional thinking and historical revisionism. “Pakistan has repeatedly highlighted the threat posed to regional peace and stability by the toxic mix of the extremist ‘Hindutva’ ideology (Hindu Rashtra) and expansionist foreign policy (Akhand Bharat) being pursued by the ruling RSS-BJP dispensation in India,” it said.

The FO said this dangerous mindset aims to completely marginalise and dispossess the minorities in India in the internal context while on the external front, it poses an existential threat to all of India’s neighbours in South Asia. “The world is witness to the systematic usurpation of the rights of minorities, especially Muslims, in India and the unabated repression of Kashmiris in IIOJK. The reckless misadventures of India, including in February 2019, that seriously imperilled regional peace and stability are also in front of the world.”

Pakistan, the Foreign Office said, has consistently opposed India’s hegemonic impulses and demonstrated a firm resolve to thwart any aggressive designs. “While committed to peace, the people and armed forces of Pakistan are fully capable of defending the sovereignty and territorial integrity of the country.”

Those belonging to the BJP and its ideological fountainhead RSS would be well- advised to refrain from making such provocative and irresponsible statements, accept the established realities, and learn to follow the imperatives of peaceful coexistence, it further added.

The Partition of British India into two separate states of Pakistan and India, on August 14 and 15, 1947, respectively, was a tumultuous time in history that caused communal riots, mass casualties and a colossal wave of migration.