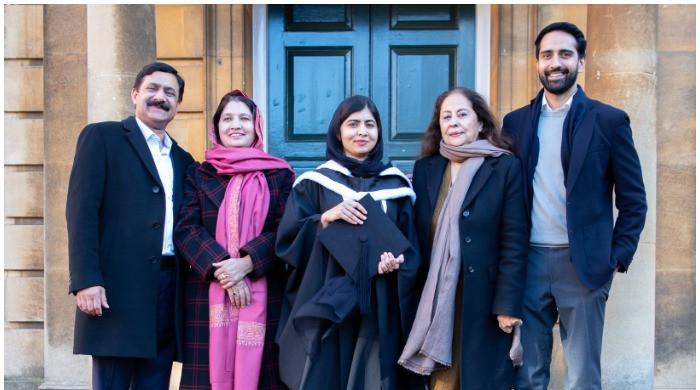 Nobel Peace Prize holder Malala Yousafzai has officially graduated from Oxford University. The philosophy, politics and economics graduate posted a series of photos from the big day on her social media handle.

Some Latin was said and apparently I have a degree 👩‍🎓

Malala was accompanied to the ceremony by her parents, Ziauddin Yousafzai and Toor Pekai Yousafzai, and her husband Asser Malik. She poses in black and white graduation attire.

In the fascinating landscapes, Malala has been spotted donning a cheeky smile while posing for her graduation pictures.

In some clicks, Malala can be seen with her friends however the spotlight of the whole occasion would definitely be Malala’s pictures with her better half Asser Malik.

Asser looks mighty proud of Malala’s achievements as he gives off a gleaming smile for the photo session.

He said that “the place we first met felt a little more special on the day of Malala’s graduation.”

Asser, who is a senior executive at the Pakistan Cricket Board (PCB), took to Instagram to share a couple of pictures from Malala’s graduation ceremony at the University of Oxford.

However, the youngest Nobel peace prize winner had tied the nuptial knot with Asser during a small ceremony in Birmingham on November 9.