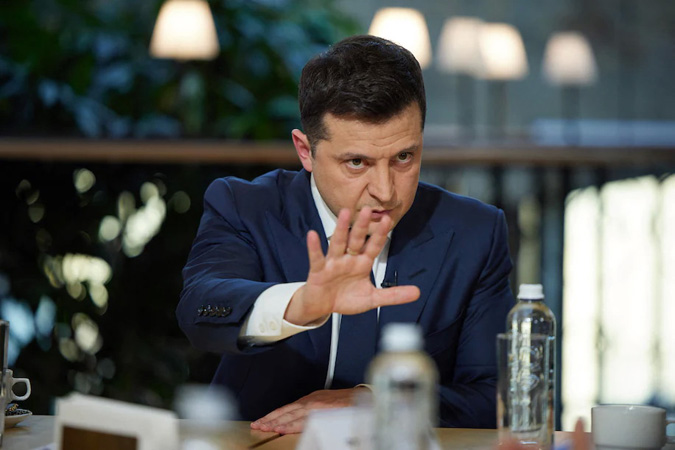 Ukraine’s President Volodymyr Zelensky said Friday that Russia was sending “very dangerous” signals with troop movements on the border, warning that his military was ready to push back any offensive.

He also claimed Kiev had uncovered a coup plot involving Russian citizens, but did not give full details.

His warning came as Western governments raise worries over Russian troop movements on Ukraine’s border, with Washington saying it has “real concerns” over the troop build-up.

“We believe that very dangerous rhetoric is coming out of Russia,” Zelensky told a wide-ranging press conference in Kiev.

“It is a signal that there could be escalation,” he said.

Zelensky said Ukraine was ready to take on Russia if Moscow decides to move troops across the border.

“There is a threat today that there will be war tomorrow,” he said, adding that Kiev’s “powerful” army was “entirely prepared”.

He called on Russian President Vladimir Putin to deny he was planning an invasion.

“The president of Russia should say in public: ‘We are not planning this’,” Zelensky said.

Moscow has dismissed the accusations and blamed Washington for raising tensions in the region.

The Kremlin has also accused Kiev of “provocations” in its years-long conflict with pro-Russian separatists in two breakaway eastern regions.

He said Ukraine had an audio recording as evidence of the plot, with Russians “discussing” Akhmetov’s role in the coup “for a billion dollars.”

He said it was planned for early December with the aim of “rocking the situation inside our country.”

Asked about the claims, the Kremlin said “Russia never does such activities.”

This week Kiev warned Moscow that it would “pay dearly” for any aggression against it.

Putin has meanwhile raised concerns over US-led military exercises in the Black Sea — a sensitive region for Russia, which controls the Crimea peninsula since annexing it from Kiev.

He has also criticised Kiev for using a Turkish-made drone against separatists, saying the move violated peace agreements.

In a phone call with European Council President Charles Michel on Wednesday, Putin said he was concerned that “provocations” by Kiev would inflame tensions in eastern Ukraine.

He also pointed out “the need to end Kiev’s policy of discriminating against the Russian-speaking population”.

Zelensky warned Friday that Russia had used the reasoning of “defending one people or another” as a pretext for aggression before.

The Ukrainian army was caught off guard by Russia’s annexation of Crimea but its soldiers have since accumulated combat experience and received arms and hardware from Western allies, particularly the United States which has committed $2.5 billion in support of Ukraine’s forces since 2014.