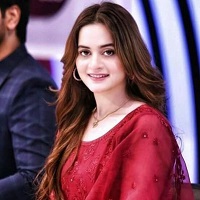 The Instagram pictures see her in an orange outfit with black polka dots on them.

Aiman Khan, who is the twin sister of celebrity Minal Khan, rose to stardom with her outstanding performance in “Meri Beti”. Her performances in “Baydardi” and “Bay Qasoor” was highly praised as well.

The celebrity tied the knot with fellow celebrity Muneeb Butt back in November 2018. She gave birth to a girl Amal Muneeb.

Aiman Khan is active on social media and keeps the fans up to date by sharing the clicks of her photoshoots and family time.

She and her celebrity husband went to Turkey to spend their holidays, where they spent leisure time and participate in the International Pakistan Prestige Awards (IPPA) 2021 as well.

They posted pictures of them before and after boarding the flight on their Instagram account. Aiman Khan shared a picture of herself with the caption “Let’s Go”. In another picture, The Baydardi actor is seen fist-bumping her husband.

Muneeb Butt, who was highly praised for his performance in the ARY Digital serial Kaisa Hai Naseeban, posted a picture of himself with his wife.