It is not contempt of court to speak about retiring judges, even ex-CJPs: Justice Minallah of the IHC 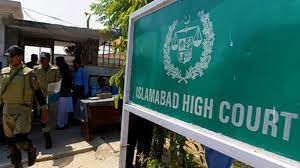 Even if the remarks were made against a former chief justice, Islamabad High Court Chief Justice Athar Minallah said on Friday that they did not warrant contempt of court charges.

During a hearing to determine the maintainability of a petition filed by Advocate Kulsoom Khaliq seeking contempt proceedings against PML-N leaders Maryam Nawaz and Shahid Khaqan Abbasi for attempting to scandalise the judiciary by their statements against former Chief Justice of Pakistan Saqib Nisar, he made this observation.

After former chief judge of Gilgit-Baltistan Rana Shamim accused him of being involved in denying bail to PML-N supremo Nawaz Sharif and Maryam ahead of the 2018 general elections, Abbasi demanded that notice be taken against Nisar on November 15 and questioned, “If Mian Nawaz Sharif can go to jail, why can’t Mian Saqib Nisar?”

His comments had come after an investigative report, published in The News by journalist Ansar Abbasi, quoted the former top judge of GB as saying in an alleged affidavit that he had witnessed Nasir relaying instructions to a high court judge to not release the father-daughter duo in the corruption references against them.

Taking up the plea against the PML-N leaders to decide about its admissibility, the IHC chief justice today said the person who had been targeted through the remarks (Nisar) could himself claim contempt and file a defamation case if they wanted to.

Justice Minallah insisted that judges were open-minded about criticism, saying, “Judges hold a very high position and they should welcome criticism.”

Khaliq, the petitioner’s lawyer, also called the chief justice’s attention to another matter ongoing with the IHC against Ansar Abbasi and others over an investigative report.

Justice Minallah, on the other hand, stated that it was a separate matter that should not be combined with the current one.

Later, the IHC reserved its decision on the petition’s maintainability.