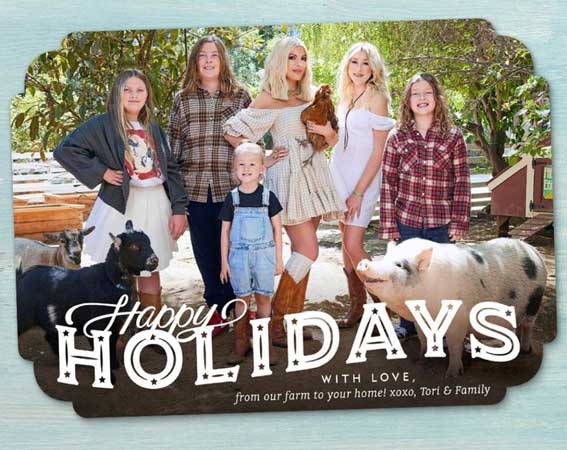 Tori Spelling is getting in the holiday spirit. On Monday, Nov. 22, the Beverly Hills, 90210 star posted the McDermott-Spelling holiday card, which featured all five of her children, Liam Aaron, Stella Doreen, Hattie Margaret, Finn Davey and Beau Dean. The greeting included the message, “Happy Holiday… With love, from our farm to your family home! xoxo, Tori & family.” And though two goats, a pig and a chicken made the cut for the family photo shoot, fans noticed that Dean McDermott, who recently celebrated his 55th birthday, was left out of the adorable photo. When some Instagram users pointed this out, Tori set the record straight in the comment section: “Fact: @imdeanmcdermott was filming his new feature film in Canada.”

Tori and Dean’s manager told E! News that Dean was shooting My Fake Boyfriend, a romantic comedy starring Keiynan Lonsdale, Sarah Hyland and Dylan Sprouse. Produced by Lionsgate and BuzzFeed, the film is being shot in Toronto. This isn’t the first time that Dean has missed a family photo. In 2020, Tori and their five kids posed for a photographer, while Dean was “away for work.” In his absence, Tori held up her iPad which showed a photo of her husband.