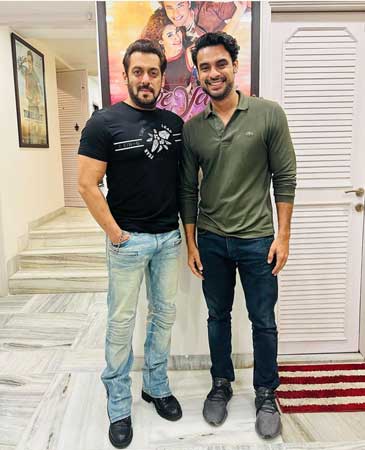 The actor noted that he was taken aback by Salman’s groundedness. “Been an inspiration,, But what amused me, meeting you Sir, is how you stay grounded, in spite of being one of India’s biggest superstars. Extremely happy in having some spent some quality time with you Sir! @BeingSalmanKhan (sic),” Tovino captioned the photo of himself and Salman.

It seems like Tovino is on some sort of a personal tour, meeting his favourite celebrities from various fields. Recently, he met cricket icon Yuvraj Singh. “Have always been an ardent fan of yours @YUVSTRONG12! Super glad to have met you and spent some quality time with you. This one will remain as breezy and memorable to me like your six sixes at Durban,” he had tweeted along with a photo.

Tovino Thomas is in the process of kick-starting the promotional campaign for his upcoming film Minnal Murali. The movie is just a few weeks away from its premiere on Netflix. Director Basil Joseph of Godha fame has helmed Minnal Murali from a script written by Arun Anirudhan and Justin Mathew.

In Minnal Murali, Tovino plays a village man who gains superhuman strength, after being struck by lightning. He also becomes the fastest man alive in the world.