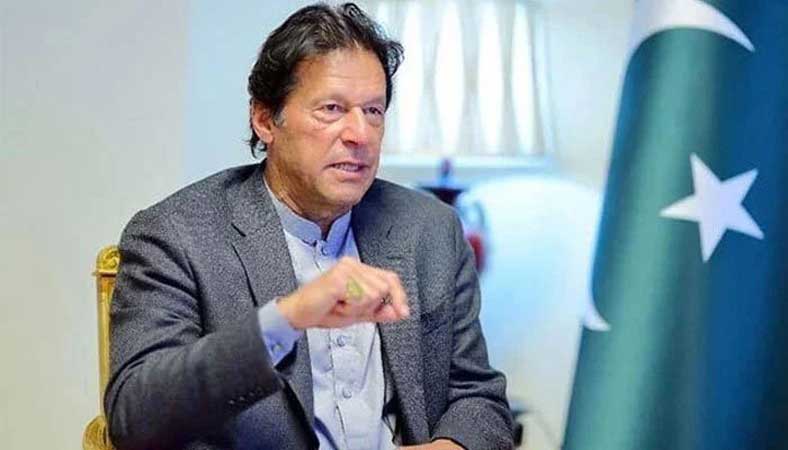 Prime Minister Imran Khan Wednesday said speeches by the Chief Justice of Pakistan (CJP) Justice Gulzar Ahmed and a person whom the Supreme Court had convicted in the same event was ‘unfortunate’.

“It is unfortunate that in a conference where the chief justice and judges of the Supreme Court are invited, who delivers a speech there? A person who has been convicted by the Supreme Court and has fled the country after lying,” he said.

“No nation is destroyed solely because of corruption, but it is destroyed when people do not consider theft as something bad,” the prime minister said, adding that when a nation’s moral values die, that is when its downfall begins.

“That is why I have established the Rehmatul-lil-Alameen Authority […] so we can learn from the life of Prophet Muhammad (PBUH),” he said.

Referring to the audiotape allegedly featuring former chief justice Saqib Nisar, he said the talk of the town was audio tapes, so “I think I should shed some light on it as judges are also being named”.

The prime minister said it was important to understand how all of it had started, as he mentioned that when he had stepped into politics 25 years ago, he had termed corruption the country’s biggest problem.

Imran said the Panama case emerged in 2016, which revealed the names of people who had stashed their money abroad and PML-N Vice President Maryam Nawaz was also listed as having four flats in one of the most expensive areas in London.

“The case ran in court and after that a JIT was formed. Instead of telling people how Maryam had obtained the [assets beyond means], he first cried ‘mujhay kyun nikala’ and then resorted to maligning the judiciary and the armed forces. I was already a bad person in their eyes,” he said.

The premier said he was dragged to the Supreme Court, and over there, he submitted all the documents that the court had asked of him. “I was not even an officeholder back then, I was a sportsman. But when they were asked to provide money trails to the court, they provided fraudulent documents. Then came the Qatari letter, which was a fraud, then came the Calibri font matter, which was another fraud.”

“Till now, they have not been able to provide a single document which gives a trail as to how they had obtained those four flats in London,” he said.

Imran said he had told his mother at the age of nine that he wanted to become a Test cricketer, but all of his relatives brought him down, saying that he could not become one – and not be a part of the national team.

The premier said when he wanted to build a hospital, establish a university in a rural area, everyone told him that he could not do it. “When I came into politics, people made fun of me – including major analysts – for 14 years.”

Imran said people told him that in a two-party system, a third party could not form the government. “Ever since we came into power three years ago, I am hearing that we will fail.”

“Everyone said it was impossible, but Allah made it possible,” he noted, adding that no person has ever become successful through shortcuts, as the secret to success was having a big vision and determination.

The prime minister said the youth had got the opportunity to excel and at the same time benefit their country through the loans and skill development programmes being offered to them via Kamyab Jawan Programme.

The prime minister said the country was going through a tough time due to the coronavirus as businesses had halted and prices of commodities shot up. However, to alleviate the adverse effects of the pandemic, the government, through Kamyab Pakistan, will provide interest-free loans to four million deserving households for building their own homes and teach them skills, he said.

The prime minister said that citizens of all the provinces and regions where the PTI is in power, including Punjab, Khyber Pakhtunkhwa, Balochistan, Azad Jammu and Kashmir, and Gilgit-Baltistan, will get universal healthcare, starting from January in Punjab.

He said families could get their ailing relatives treated at hospitals under the health scheme worth Rs700,000-1,000,000.

The prime minister said there were some problems that his government faced earlier, but now, Pakistan was moving towards becoming a successful nation. He reminded the people that it was crucial to lift their moral standards.