Avenfield case, Maryam asks former CJP Nisar who ‘pressured’ him and whom he ‘could not resist.’ 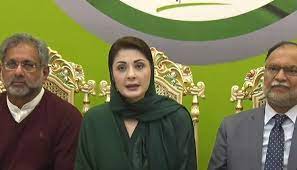 ISLAMABAD: PML-N Vice President Maryam Nawaz demanded answers from former Chief Justice of Pakistan Saqib Nisar on Wednesday, asking him to come forward and tell the nation who “pressured” him and who he “could not refuse” regarding her and her father, former Prime Minister Nawaz Sharif’s convictions in the Avenfield apartments case.

Maryam gave a lengthy news conference about a recently leaked audio clip supposedly having the voice of Nisar, who has denied interfering with the case’s legal proceedings.

The PML-N leader said that when Nisar was asked what he plans on doing about the allegations against him, he said he is “not mad to pursue the matter in court”.

Maryam, addressing the former CJP, said: “Whether today or tomorrow, you will have to tell the nation the truth. There is still time. Come forth, tell the nation who pressured you to sentence Nawaz Sharif if it was unwarranted? Who pressured you to sentence Maryam Nawaz, if it was without merit. And who told you that Imran Khan needs to be brought to power?”

“Who was it that you could not refuse, despite being the chief justice of Pakistan at the time?” she continued.

“Why were you forced to take an illegal, unconstitutional step?” she asked.

“You will have to answer all this.”

Referring to the media coverage regarding the leak, she said that she will not name the outlet, but one media outlet “assumed the responsibility” for analysing the clip themselves.

She said that first Nisar denied any connection with the clip and said that it is not him who can be heard in the audio. Then, after the TV channel said that his audio from various occasions had been spliced together to create the clip, “he too stepped forth to agree”.

So the TV channel that led to his “admission” of his voice being part of the clip deserves some “thanks”, she said.

Maryam said that as soon as The News journalist Ahmed Noorani out the clip, “propaganda” regarding the clip began.

“This was despite a very renowned American company doing the forensic analysis of the clip. They have clearly stated that the clip has not been edited in any way.

“But a campaign began to prove the clip false.”

She said the TV channel even ran footage showing where he had spoken the same bits that can be heard in the controversial clip.

Maryam said that those bits, however, may just be “catchphrases”, also citing the example of Prime Minister Imran Khan, who is known for often saying in his speeches “ghabrana naheen hai (you must not panic)”.

The PML-N leader, addressing the TV channel directly, questioned their omission of the bits from the audio clip that are the “real crux of the matter”, that are the “charge sheet against Saqib Nisar” and demanded to know which speech those bits are from then.

“So the bits that you like are his voice and the parts that you do not, are not his voice?” she asked.

Maryam said that the people are waiting and that they demand to know “when it was that he showed such bravery during his tenure when he admitted to doing such a thing”.

The PML-N leader went on to ask whether the bombshell allegations were made by Justice Shaukat Aziz Siddiqui, too, who said “he was asked not to grant bail” to her and to her father, former prime minister Nawaz Sharif, are false then.

She demanded that the parties involved in the Justice Siddiqui scandal be summoned in court, made to stand in the witness box and a sworn testimony be taken from them.

Maryam said that audio clips and videos may be material that one can be sceptical about “but Justice Siddiqui is very much alive and he must be inquired about his allegations”.

Similarly, ex-chief judge of Gilgit-Baltistan Rana Mohammad Shamim, whose sworn affidavit claims that Nisar influenced proceedings to prolong Maryam’s and Nawaz’s imprisonment, must be called upon and questioned, she said. “He said he is ready to appear at any forum and testify to the veracity of the statement he gave,” she added.

‘Fifth testimony to have surfaced in PML-N’s favour’

She stated the audio is the “sixth testimonial to have appeared in Nawaz’s and PML-favor,” N’s counting the testimonies delivered by Justice Siddiqui, Arshad Malik, Bashir Memon, Rana Mohammad Shamim, and others.