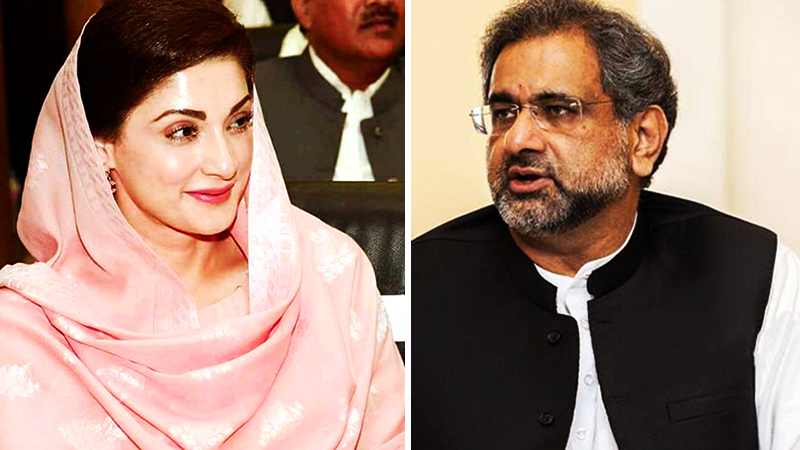 ISLAMABAD: On Wednesday, a petition for contempt of court has been registered against PML-N Vice-President Maryam Nawaz and former prime minister Shahid Khaqan Abbasi in Islamabad HIGH Court for dishonoring the judiciary.

Lawyer Kulsoom Khaliq who filed the petition maintained that on November 15 Abbasi said “if Nawaz Sharif can go to jail, then why can’t Saqib Nisar,” and these remarks fall under contempt of court.

She further asserted that both PML-N leaders used offensive words against the judiciary and tried to malign it by speaking ill of former chief justice of Pakistan Mian Saqib Nisar.

According to the petition, both Maryam and Abbasi should be “punished” for contempt of court.

“It is necessary for the effective administration of justice that contemnors are severely punished in light of judgment MLD,” it read.

The petition requested the court to “summon” or issue “notice” to PML-N supremo’s daughter Maryam and ex-premier Abbasi “for violating the dignity of justice” and the “character assassination of the Honourable Justice Mian Saqib Nisar and misstating facts of the Honourable Supreme Court”.

Earlier last week, PML-N’s Abbasi said, “Justice Shamim has given an affidavit about the former CJP [Mian Saqib Nisar] without any pressure and the people of Pakistan have the right to know the truth.”

Abbasi questioned that if former premier Nawaz could be sent to jail, then why not Justice (retd) Nisar. “The efficiency of the country’s higher judiciary has been questioned in the instant matter.”

The PML-N leader said that the statement under oath by former CJ of G-B High Court further exposed how Imran Khan was brought to power through organised and institutionalised rigging in the 2018 elections.

The PML-N vice-president, on the other hand, called the affidavit by Shamim “the third major testimony from within the judiciary” that allegedly proved her and Nawaz’s innocence.

“We knew that the oppressors’ days were numbered but we didn’t expect the truth would come to light so soon,” said Maryam.