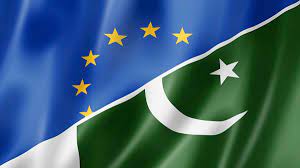 BRUSSELS: Experts agreed during a study tour event in Brussels that cooperation between the EU and Pakistan on unconventional dangers to the world, such as climate change, food security, and migration, will bring peace and prosperity to the region.

These views were expressed by them on a study tour of the European Union’s capital. The tour was jointly organised by German think-tank Hanns Seidel Foundation’s (HSF) Pakistan chapter and the Centre for Global and Strategic Studies (CGSS) Islamabad.

The list also includes misinformation and misinformation, he said, adding that these issues are leading to the realisation that non-conventional threats can do more harm to humanity in future.

“Everything in today’s world is interconnected,” he said, adding that this is why it’s important for people to come together and talk to each other about resolving these issues. The purpose of this visit is also to bring the experts of Europe and Pakistan closer to each other, he emphasised.

CGSS chief executive Lt-Colonel (retd) Khalid Taimur Akram, who was leading the delegation’s visit to the EU, explains the aims and objectives of the visit. He said that the delegation was part of an exchange programme to discuss non-traditional security challenges in Pakistan and Europe with various EU institutions, European Commissions, Parliament, civil society organisations, NATO experts and different DGs of EU agencies.

The dimension of security has now changed, commented MNS-University of Agriculture, Multan Vice-Chancellor Dr Asif Ali, adding that climate change is causing other changes. He said that is what food security is all about and that without it, security is unthinkable.

“Therefore, solutions to these problems can only be found through a combination of experience and knowledge,” he said, sharing that his university has been working on a new seed for wheat production in Pakistan. “There is a need to improve local products and seeds through mutual cooperation,” he opined.

We also need each other’s help to deal with them, he pointed out.

Dr Muhammad Ashraf, Chairperson of the Pakistan Council of Research in Water Resources (PCRWR), stated that Pakistan is an agricultural country where hot heat is becoming hotter and cold weather is becoming colder owing to climate change.