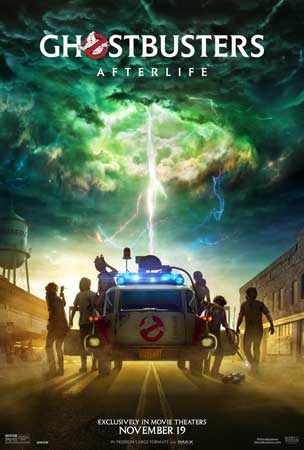 The film comes 37 years after the first “Ghostbusters” and is packed with references to that classic. Original stars Dan Aykroyd, Bill Murray, Ernie Hudson and Sigourney Weaver all have cameos, and it is directed by Jason Reitman, whose father Ivan Reitman made the original.

This version stars Paul Rudd, Carrie Coon and Mckenna Grace in a ghostly tale set not in 1980s Manhattan but decades later in small-town Oklahoma. But no worries: the havoc-wreaking Stay-Puft marshmallow man is back, if only in miniature, haunting the creepy aisles of a Walmart.

Disney/Marvel superhero film “Eternals” in the meantime slipped from first to second for the Friday-through-Sunday period, taking in $10.8 million. Angelina Jolie, Salma Hayek, Richard Madden and Gemma Chan star in the story of an immortal race of aliens who emerge from hiding to save the Earth.

In third, also down one spot, was Paramount’s family-friendly “Clifford the Big Red Dog,” at $8.1 million. Based on the children’s book series, it follows young Emily Elizabeth and her astoundingly large dog as they tromp through New York City.

“King Richard,” from Warner Bros., has received what Variety called “rapturous reviews” and created Oscar buzz around Will Smith for his portrayal of Richard Williams, father of tennis superstars Venus and Serena Williams.

But its opening weekend, while placing it fourth at the box office, brought in only $5.7 million, possibly in part because of its simultaneous release on HBO Max.

In fifth, down two spots, was Warner Bros. sci-fi spectacular “Dune,” at $3.1 million. This rendition of the Frank Herbert classic stars Timothee Chalamet, Rebecca Ferguson and Oscar Isaac in the story of survival on a frightening desert planet.