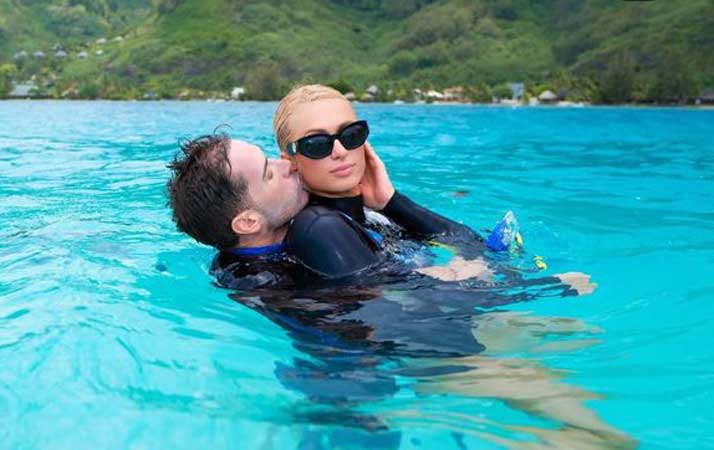 Following their extravagant three-day wedding celebration, the couple embarked on what Paris called a “honeymoon world tour” as their first vacation as husband and wife.

On Sunday, Nov. 21, the Cooking With Paris star gave fans a glimpse of how she and her new husband kicked off their jet-setting adventure by writing on her Instagram, “First stop on our Honeymoon world tour… Bora Bora.”

It appeared that hitting the open waters was at the top of their itinerary, as Paris shared several photos of herself canoodling with Carter during a boating excursion. She wrote in the caption, “Swimming in the South Pacific oceans with my love.”

The DJ and entrepreneur capped off her post with “#ParisAroundTheWorld” and #MyDreamHoneymoon,” as well as a hashtag of the name of her new Peacock docu-series, Paris in Love, which details her journey down the aisle.

Paris wed Carter on Nov. 11 in a lavish ceremony held at her late grandfather’s former estate in Bel Air, Calif. A day later, the newlyweds celebrated their marriage with neon carnival-themed party at the Santa Monica Pier. They ended the wedding festivities by hosting a third bash at the place where they had exchanged vows.

“The three-day event kept their schedules jampacked with little room for rest or sleep, but you couldn’t tell by looking at them,” a source recently told E! News of the happy couple. “Paris felt great about how everything turned out in the end.”

As for their honeymoon, it seems like the Hilton-Reums have made it into a family affair. Paris re-shared an Instagram Story post from sister-in-law Courtney Reum about their “family honeymoon,” which teased that the group will travel to Tahiti next. Paris was also seen dancing on a boat in an Instagram Story video shared by her brother, Barron Hilton, on Monday, Nov. 22.