No pressure from institutions: CJP

* Justice Gulzar says judiciary will always support and promote constitution, law and democracy in country and will not accept any undemocratic setup 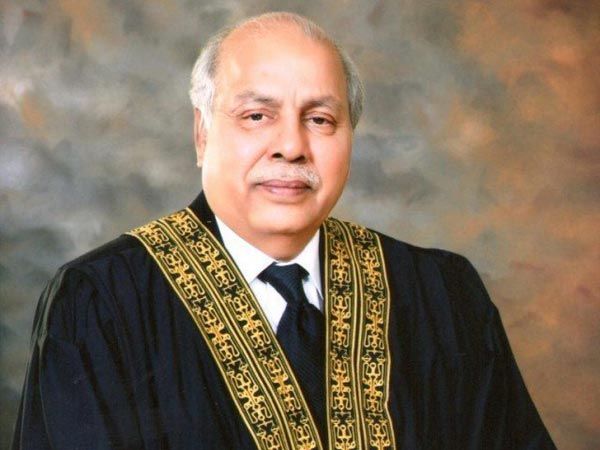 Taking umbrage at allegations of partiality against the judiciary, Chief Justice of Pakistan (CJP) Justice Gulzar Ahmed Saturday said his court never accepted pressure from anyone, nor will it ever do so.

Addressing an event in Lahore held in memory of the late human rights activist and eminent lawyer Asma Jahangir, Justice Gulzar said allegations that some powerful quarters were influencing the judiciary did not sit well with him.

Responding to veteran lawyer Ali Ahmed Kurd’s speech in which he accused the courts of not working independently, the CJP said, “I have never [taken dictation from] any institution and have never been under pressure from anyone.”

“No one has ever told me what judgement I need to hand down and no one has dared to dictate me on my orders,” the country’s he said. “No matter how many cases have come to me, I have never made a decision at the behest of anyone,” he said.

“No one has interfered in my work – I have made my decisions according to my understanding and as per the Constitution and law,” he said. “I have not taken anyone’s dictation till today and my fellow judges follow the same conduct. No one can say that I have taken dictation,” he added.

The chief justice insisted that the courts were working according to the law and that the Supreme Court judges were striving to deliver justice to the people. He said all the judges of the Supreme Court were working very diligently and putting in extra time and effort for dispensation of justice, rule of law and the Constitution, prosperity of our democratic nation, and for supremacy of justice.

He noted that the judges of Islamabad, Peshawar, Lahore, Sindh and Balochistan high courts were all diligently administering justice. “The lower judiciary also hears cases on a daily basis and gives decisions in accordance with the law,” he said.

“When decisions are handed down, some people say they are right and some say they are wrong. These are the people’s opinions and they have the right to hold them. Everyone has their own opinion and perspective, and it must be respected. This is the beauty of the judiciary and democracy and we will follow it. Nobody can dare stop us.”

However, differences of opinion do not allow any party to accuse the courts of being under pressure, the country’s top judge underlined.

“Our court is free to take decisions and it does what it wants freely. Our court hears each party to a case and holds them accountable,” he added. “Ali Ahmad Kurd sahib, come to the courts and see what is happening. Read the decisions taken by the courts,” the chief justice said. “The judges in my courts author verdicts daily and these are published in books. Take a look at them, read them,” he urged the lawyer. “Tell us which decision was taken on someone’s dictation – it simply isn’t so, so stop creating these misgivings among the people,” he warned.

“Do not misguide the people, do not spread chaos, do not shake people’s trust in the [state’s] institutions,” he continued in his sharp rebuke.

“There is rule of law in Pakistan, not some individual’s. We will continue to work the way we have been. We will support and promote the Constitution, law and democracy in the country and we will not accept any undemocratic setup. We will quit [if forced to do so] and we have done this before. That should be enough for today,” he concluded.

Commenting on the topic of the conference, Kurd lambasted the judiciary. “One general is dominating a country of 220 million people. This same general has sent the judiciary down to number 126 [in rankings],” he said. Kurd said there was a clear and observable division within the judiciary, adding that the country’s “intellectual class was finished” and “because there is no intellectual class, people of small stature are sitting at the top.”

Meanwhile, Islamabad High Court Chief Justice Athar Minallah acknowledged some of Kurd’s criticism during his speech prior to CJP’s. Justice Minallah expressed his gratitude to Kurd because “it is very important for us to know what the bar and what the people think about us.”