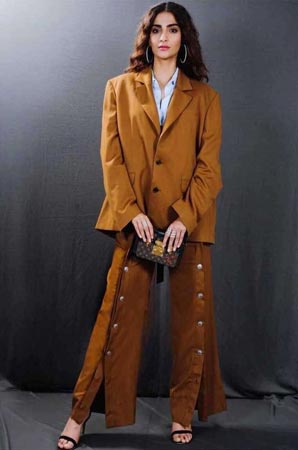 The conjurer of iconic looks, one who can pull off pretty much any ensemble and never shies away from experimenting, Sonam Kapoor Ahuja’s wardrobe has always been an object of envy.

From her jaw-dropping red carpet looks at Cannes to never missing the memo of airport fashion, the Aisha actor has been there and done it all. Yet, she continues to push her envelope, establishing herself among the world’s fashion elite and a sartorial force to be reckoned with.

Bolder than ever, she is never not making waves with her boundary-pushing outfits. As such, her recent Egyptian goddess-like look in a Vivienne Westwood corset piece styled by Elad Bitton with a stunning neckpiece is as fierce as ever, and yet another example that she’s not interested in playing safe.

Additionally, her recent creative collaboration with stylist Nikhil Mansata, can be called a major milestone in the actor’s sartorial journey. They first worked together for one of her favourite and frequently-worn designers, Anamika Khanna. The creative genius aside, the pictures were a marker of the new blood in her style. Next up on the map was this surreal and ground-breaking look, also styled by Bitton, for Harper Bazaar India’s 12th anniversary cover story. The Veere Di Wedding actor was clad in a Schiaparelli satin dress and trousers, eyeglasses, and earrings.

She is fashion royalty and she knows it, as is evident in this Loewe set that is a picture of timeless grace and finesse.

If this is what a date night look should be like, were we ever doing date night right? A picture of perfection in The Row dress, Aquazzura shoes, and a Gabriela Hearst bag, styled by Mansata.

The duo struck again in this classic yet elevated black and white look in Prada, The Row, and Shaun Leave jewellery. Regal in an Alexander McQueen ruffled dress in a brilliant red, she kept it simple, yet stunning. Bitton styled Kapoor in a contemporary lehnga by Eman Alajlan for her Diwali celebrations in London.