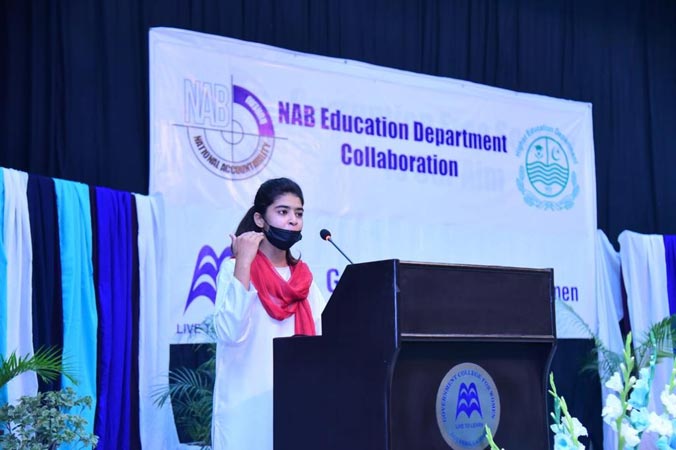 The main objective to organize these competitions is to highlight the importance of Accountability Institution in the way to eradicate the menace of corruption from Country and to prepare upcoming generation to root out the corruption. For the purpose, NAB Lahore held a competition in which students expressed their thoughts on canvases by using colorful sketches. NAB Lahore continues to organize the “Essay, Declamation and Painting, Posters competitions among School, College and University level students of 21 Districts of Punjab every year and similarly these activities are underway this year, too.

The Director NAB Lahore, while concluding the event spoke to the students and other faculty members of the educational Institutions that NAB is a prestigious Anti Corruption body working to culminate corruption from our beloved country and the services extended by this Bureau are being appreciated by various International Anti Corruption Departments. In this regard, Chairman NAB, Justice Javed Iqbal has directed all the Regional Bureaus to keep up the Awareness & Prevention activities alongwith operational ones. Whereby, under the supervision of Director General, NAB Lahore the regional Bureau of Lahore is successfully doing with the activities of Awareness & Prevention other than operational acts. Director NAB Lahore handed over the appreciation Certificates to the winning students of the competition, whereas, all the winning students would receive cash prizes and merit certificates on International anti-corruption Day event which is being celebrated at 9th of December.