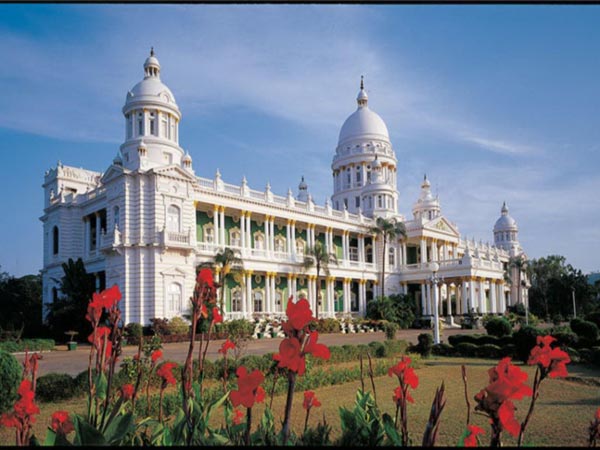 Lalitha Mahal Palace, a celebrated architectural icon built by the Mysore royals originally for stay of viceroys and other state guests and equipped with a hand-operated heritage lift imported from England in 1921, has turned 100.

Exactly hundred years ago on November 18, 1921, the foundation stone of this palatial building, said to be modelled on St Paul’s Cathedral in London and featured in many movies, was laid by Krishnaraja Wadiyar IV, the then maharaja of the Mysore Kingdom.

The centenary day of the once-regal palace, now a heritage hotel, was ushered in albeit quietly on Thursday as management and other staff went about their daily business, but everyone there knows the significance of the day.

“The foundation stone is mounted in the lower portion of the portico. The great Nalwadi Krishnaraja Wadiyar, the then king of Mysore, had laid the stone and the palace was built for stay of viceroys and other state guests of the Mysore royal family. It has a grand regal charm on its exterior and boasts of high-quality opulence in its interior,” Manjunath, manager of Lalitha Mahal Palace Hotel, told PTI.

The architect of the palace was EW Fritchley, as engraved on the foundation stone.

The centenary of the palace comes ahead of the World Heritage Week held from November 19-25.

The historic building, with its shimmering white façade surrounded by beautiful landscaped gardens set in a sprawling 40-acre campus, sits on a hillock on the foothills of revered Chamundi Hills and is located a few kilometres outside the main city of Mysuru.

The majestic two-storied structure mirrors the styles of English manor houses and Italian palazzos with a projecting porch. A row of twin Ionic columns on both floors in the facade support the structure, which has a dominating central dome and cupolas at the roof level.

“We are happy that this iconic and historic building has turned 100. But no celebrations have been planned as such for November 18 centenary anniversary day as of now,” the manager had said on Wednesday.

The palace, which is said to have been built over nearly 10 years, shone as an architectural jewel in its heydays, but saw a period of faded glory after Independence and was later taken up on lease by the India Tourism Development Corporation (ITDC) to run as a heritage hotel. The hotel was inaugurated on September 13, 1974, according to a marble plaque embedded in a wall of the portico.

From 2018 onwards, it has been operated by Jungle Lodges and Resorts, an entity of the Karnataka state government. The main heritage hotel has 22 rooms, including heritage suites – Viceroy Suite, Vicerine Suite, Duplex Suite, Heritage Suite and Turret Rooms and 32 rooms in an annexe building added later, according to the management officials.

Subbaih IN, manager, food and beverages department at the hotel, takes pride in showing to guests, the vintage features of the palatial building, whose interior halls, rooms and lobby are exquisitely embellished.

“The prized heritage of this hotel is a hand-operated lift, which was brought for the palace 100 years ago by the Maharaja. There is another heritage lift, mechanical one, accessible from the foyer area, but the hand-operated one is a rarity,” he told PTI.

According to a board placed on it by the management, the lift of one tonne capacity was imported from Waygood-Otis company of England by Krishnaraja Wadiyar IV, during the year 1921.

“This lift is preserved without changes in the architectural features of the heritage equipment,” the text on the board reads.

While the palatial building may now be under a different administration, signatures of its royal patronage in the past are visible, from the Mysore royals insignia on the pediment of the main facade, the channel gate of the mechanical lift, and ornate porch royal emblems placed in walls of the entrance area facing the lobby.

Mysuru native Krazveen, who has been working as a ‘durban’ at the hotel for over three decades, said he has welcomed many guests who have experienced western opulence and Indian hospitality at the Lalitha Mahal Palace.

“Bollywood megastar Amitabh Bachchan and film crew had come to Mysore to shoot film ‘Mard’. The actor had shot scenes here during his Mysore stay. ‘Sadak’ film was also shot here,” he said.

The security guard then belted out a list of Bollywood films shot in the premises of the hotel, and also southern hits like ‘KGF’.

Krazveen said the hotel also has a vintage one-horse buggy which is currently under maintenance. Guests love taking ride in it and “as the palace turns 100 its charm will get enhanced now”.

The interior of the hotel has a magnificent banquet hall which served as a ballroom earlier and a majestic conference hall and a grand staircase with heritage lamps. Portraits of many Mysore kings, including Krishnaraja Wadiyar IV and rare artworks depicting life of Mysore ruler Tipu Sultan and his family, are hung in the lobby and neighbouring walls. A visit to this heritage palace is enough to transport anyone to an era gone by.