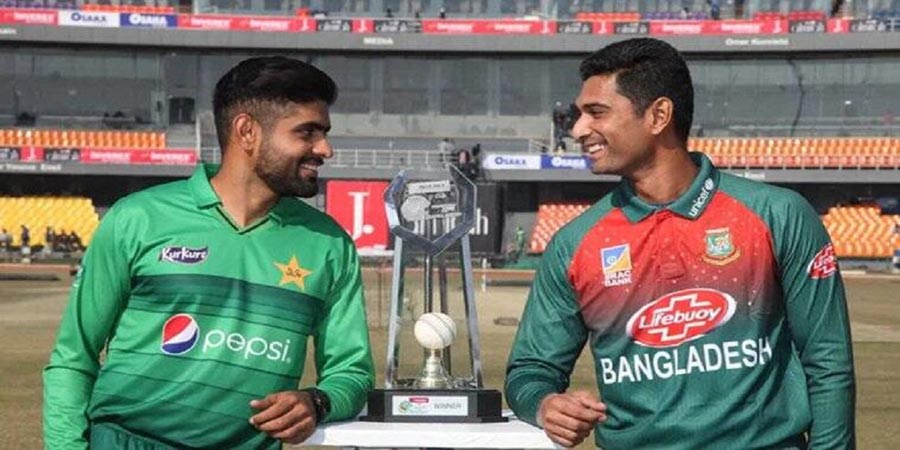 DHAKA: Bangladesh and Pakistan are two sides very much on the opposite ends of the confidence scale, with a team on a roll taking on a line-up that is in transformation after a disappointing T20 World Cup campaign. The two teams meet in a three-match T20I series starting Friday (today).The visitors will be wary of Bangladesh’s dominance at home, even though they failed to secure a win in five games in the Super 12s in the UAE.Pakistan aim to keep up momentum from their strong T20 World Cup showing with a largely unchanged squad for this week’s tour of Bangladesh, skipper Babar Azam said Thursday. Babar’s side stormed through the Super-12 phase of the Dubai tournament with five straight victories before a shock five-wicket loss to eventual winners Australia in the semi-final. Pakistan fielded the same line-up in all six of their World Cup matches and have retained almost the same squad for the Bangladesh series, which starts with Friday’s Twenty20 showdown in Dhaka. “Momentum always matters in cricket and we would like to carry that momentum,” Babar told reporters ahead of the game. Mohammad Hafeez is the only player not to make the Bangladesh-bound flight after opting out of the squad, with Iftikhar Ahmed brought on as his replacement.

Pakistan batting line-up has adjusted to most conditions and has imposed themselves on several occasions. Babar and Mohammad Rizwan have led the team well as openers, while the likes of Fakhar Zaman and Shoaib Malik have contributed at crucial moments. Shadab Khan and Mohammad Nawaz are the spinning allrounders in the lower middle order, although their bowling would be more important on the slow Dhaka pitches. Shaheen Shah Afridi leads the bowling attack and his first over spectacle will be closely followed in Dhaka. Barring his last over against Australia, he had a great tournament in the UAE, picking up seven wickets in six matches. Pakistan also have extra pace from Haris Rauf, while Hasan Ali, smarting from his dropped catch in the semi-final, will be out to prove a point. Shadab Khan almost got Pakistan to the T20 World Cup final with his four-wicket haul in the semi-final against Australia. He only gave away more than 30 runs in one of the six games in the tournament, an effort that has brought him out of a bad patch from the last two years. He will be a major threat for Bangladesh, who have found legs pin difficult to handle. Pakistan have rested Asif Ali and Imad Wasim to give Haider Ali, Khushdil Shah and Mohammad Nawaz a chance. There will be a toss-up between Mohammad Wasim Jr. and Hasan Ali for the third fast bowler’s slot.

Bangladesh are missing several senior players who have been ruled out due to injury or rested after a disastrous World Cup campaign, where they failed to win a single Super-12 match. Captain Mahmudullah Riyad said his side were looking to start afresh and put the Dubai debacle behind them. “Whatever happened happened. If we think much about it that would affect us negatively. We want to think positive,” he said. One of Bangladesh’s biggest problems this year has been catching. They dropped 11 catches during the T20 World Cup, having already been the team to have dropped the second most number of catches this year. It got the fielding coach fired, and training sessions now include more focus on catching. The dropped catches could, however, be linked to general unease within the team throughout this year.The second and third Twenty20 internationals will be held on November 20 and 22 in Dhaka. Both are day-night games, with fans returning to the stands in Bangladesh for the first time since the Covid-19 pandemic shut stadiums to crowds in March 2020. Pakistan will also play two Test matches during their tour.