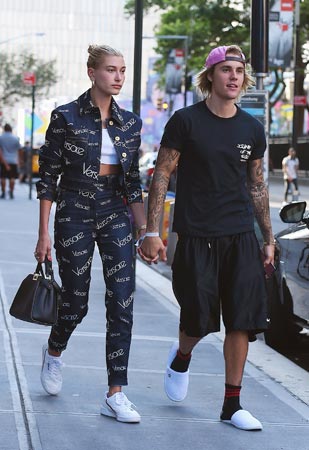 For Hailey Bieber, one musician in her house is more than enough. While answering fan questions in a video uploaded to her YouTube channel on Wednesday, Nov. 17, the supermodel, 24, shared that she has no intentions of ever performing with her husband, Justin Bieber.

The candid revelation came when a fan asked Hailey if she “ever sang with Justin onstage before.” Responding to the question, Hailey quipped with a dead-serious expression, “That sounds tragic.” “I don’t have a bad voice, but I can’t sing like a singer can sing,” she continued. “I would be so mortified.” She added with a laugh, “So no.”

Hailey prefers to spend quality time with Justin, 27, doing other things. As she explains elsewhere in the video, she believes it’s important to separate work from her private life and put family first.

“You have to know what your priorities are, and I think the second you let your work life become more important than your spouse or your family life, that’s when it can feel a little bit consuming,” she said.

Hailey and Justin got married in a New York City courthouse in September 2018 following a two-month engagement. The pair went on to have a second wedding ceremony in South Carolina one year later.

In a recent episode of the in Good Faith with Chelsea & Judah Smith podcast, Hailey detailed their love story and how she had always known that Justin was the one-even during the times they “were maybe not cool with each other and didn’t speak.”

“Everybody always wondered why I held onto the idea and hoped that maybe it would work out,” Hailey said, before explaining that she knew Justin was serious about their relationship “because the conversation we were always having behind closed doors” was about long-term goals of marriage and children.

“I just think kept thinking, ‘I don’t think he has to say those things. I genuinely think that’s what he wants out of his life,'” she shared. “I knew it!”