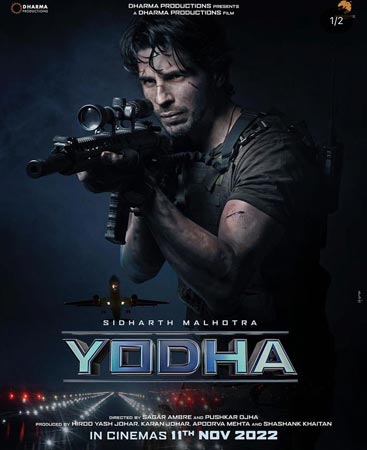 Actor Sidharth Malhotra will be seen starring in filmmaker Karan Johar’s upcoming production titled ‘Yodha’, which will hit the screens on November 11, 2022. Karan on Wednesday shared a glimpse with his fans about the upcoming project revealing that it will be the production label’s ‘first-ever action film franchise’. Karan wrote, “After conquering the peaks, I am proud to present Sidharth Malhotra back with power in the first of the action franchise by Dharma Productions – #Yodha. Directed by the dynamic duo – Sagar Ambre & Pushkar Ojha. Landing in cinemas near you on 11th November, 2022.” The filmmaker then announced that the female leads will be announced soon. “#Yodha is coming to hijack your screens on 11th November, 2022. Directed by Sagar Ambre & Pushkar Ojha. Stay tuned, because our female leads will be announced soon!Airplane,” he added. Sidharth was last seen onscreen in ‘Shershaah’, where he played the role of Captain Vikram Batra.