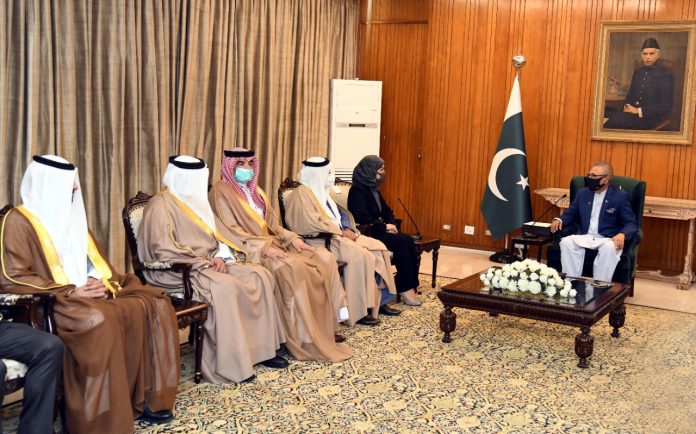 ISLAMABAD: Pakistan and Bahrain on Thursday reiterated their desire to further promote and expand bilateral cooperation in various areas of mutual interest.

In a meeting between President Dr. Arif Alvi and the visiting parliamentary delegation of Bahrain, the two sides emphasized the need to further improve trade, economic and political relations. The delegation was led by the Speaker of the Council of Representatives of Bahrain, Fawzia Bint Abdulla Zainal. Welcoming the delegation, the president said that Pakistan and Bahrain enjoyed excellent relations in various fields which were based on common bonds of religion and culture.

He highlighted that Pakistan had great potential for exports in agriculture, food items, livestock, fisheries, and surgical instruments to Bahrain, and the volume of trade between the two sides needed to be enhanced. He added that Pakistan was an attractive destination for foreign investors as it offered enormous trade and investment opportunities and the business community of Bahrain required to benefit from these opportunities. The president also underlined the need to make collective efforts by both the brotherly countries to counter the challenge of Islamophobia.

He also shed light on the atrocities being committed by the Indian security forces in the Illegally Occupied Jammu and Kashmir and urged the international community to play its role in resolving the long outstanding dispute in accordance with UN Security Council resolutions.

She emphasized the need to further broaden bilateral cooperation between the two brotherly countries. She also conveyed warm regards from the King and the Prime Minister of Bahrain to the President.