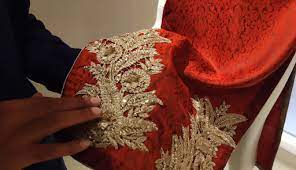 Asim Mushtaq, a Pakistani PhD student at Zhejiang Sci-Tech University, participated in the event and submitted his cheongsam design.

“When China National Silk Museum announced to organize the exhibition then I decided to take part in it to give some presentation by Pakistan. I think it’s a great opportunity for cultural fusion.

“Cheongsam is a very famous traditional costume of China with very attractive form and often made of silk. While in Pakistan, silk is not produced in high quantity so I tried the Cheongsam design on ZARI fabric and Mixed silk fabric,” Asim told China Economic Net.

Majored in Materials Science and Engineering, Asim has a unique perspective on the choice of fabric for cheongsam design.

“Embroidery on the clothes for female as well as male is one of the Pakistani cultural designs. So while designing cheongsam for the exhibition, I consult with the Pakistani tailoring master to have a fusion of Pakistani embroidery and glass applique on the Chinese cheongsam,”Asim said.
The organizers invited many fashion designers from Asian countries based on the traditional form of Cheongsam.

“Every designer would apply their own design idea and their country culture with the theme of Nature. I think Qipao is the best carrier to exchange and integrate the Asian cultures.”

When asked about the differences between Chinese and Pakistani art styles, Asim said that Chinese art style is the typical Oriental culture and Pakistani art bears the great influence of Islamic art and Indian subcontinent culture. With the theme” vision, the exhibition and the designs of Cheongsam make a fusion of different civilizations.

“My design indicates the nature of Pakistan through the image of lavender flower and the famous glass applique textile technique of Indian subcontinent. I hope that people can see the Pakistani spirit in the form of Chinese cheongsam,” he said.

This ongoing exhibition, which was co-sponsored by the Hangzhou Municipal Bureau of Culture, Radio, Television and Tourism and China National Silk Museum, will run until October 1, 2022.