Milan Luthria opens up on shooting ‘Tadap’ in extreme weather

* Milan Luthria said, 'The search for the ideal location for Tadap was not an easy one' 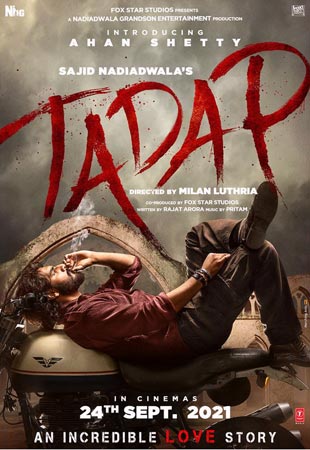 Tara Sutaria and Ahan Shetty’s upcoming entertainer Tadap is high on the buzz word. It marks the debut of Ahan and its trailer has already upped the excitement levels. The film has been said to be shot at real and aesthetic locations of Mussoorie and director Milan Luthria opened up on the same.

Milan Luthria said, “The search for the ideal location for Tadap was not an easy one. We wanted a place that supported both rugged action and glorious romance and was also relatively unexplored and fresh. Our writer Rajat Arora had spent his summers growing up in Mussoorie, and we headed there for a look. It took me by surprise. I have shot all over India, but this Queen of the Hills is aptly named. It has very good accessibility, stunning heights of more than 6,000 feet and an abundance of natural beauty. It also is one of the cleanest and most well-maintained hill stations in India. Add to this the sister hill station of Landour which has a fabulous British feel with cobbled roads, church and quaint bakeries and cafes and you get two for the price of one.”

He continued, “The winding roads climbing the ghats were ideal for our bike sequences and chases, while the intimate cafes and the abundance of natural beauty in the form of beautiful trees, wide vistas and multi-hued flowers in bloom gave us the perfect backdrop for the romantic parts.

Many of the old structures, homes and palace hotels are very well maintained and spotless, and these were adapted into homes for the lead characters.”

Adding to it he shared, “One of the main challenges of the shoot was the weather, especially at nights. It would suddenly drop to sub-zero, with a wind chill factor thrown in.

Some of the scenes have been shot with the actors holding hot water bags till a few seconds before the camera rolled. To sum up, a lot of the freshness in Tadap has to do with the stunning vistas, natural beauty and stunning blue skies of this beautiful part of the country.”

Produced by Sajid Nadiadwala, co-produced by Fox Star Studios, directed by Milan Luthria and written by Rajat Arora, ‘Tadap’ is scheduled to release on December 3, 2021.