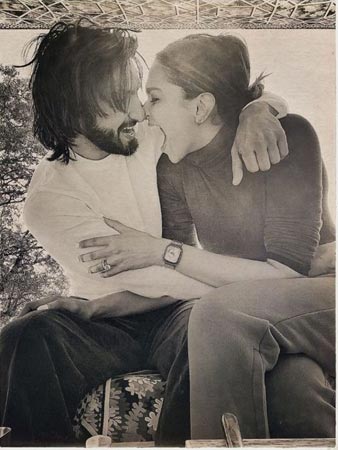 The power of Bollywood, Deepika Padukone and Ranveer Singh recently celebrated their third wedding anniversary together in Uttarakhand.

The duo kept the celebrations hush-hush this time and didn’t reveal their vacay destination.

However, soon pictures of them posing with fans and visuals from Dehradun airport went viral on the internet. Several fan pages shared the photos and videos online.

The duo got married at the picturesque Lake Como in Italy. The adorbs got married as per Konkani and Sindhi ceremonies on November 14 and 15, 2018 respectively. The couple had hosted two grand receptions later in Bangalore and Mumbai for family and friends.

On the work front, Ranveer will be seen in Kabir Khan’s ’83, a sports biopic on the historic moment when India lifted the cricket World Cup trophy in 1983. He is playing the legendary Kapil Dev in the movie while Deepika will be seen as reel wife Romi Dev. He also has Cirkus, Rocky Aur Rani Ki Prem Kahani and Jayeshbhai Jordaar in his kitty.

Deepika has filmmaker Shakun Batra’s next with Ananya Panday and Siddhant Chaturvedi of ‘Gully Boy’ fame. She will be next seen in Hollywood superhit The Intern’s Hindi remake, Pathan and Fighter.