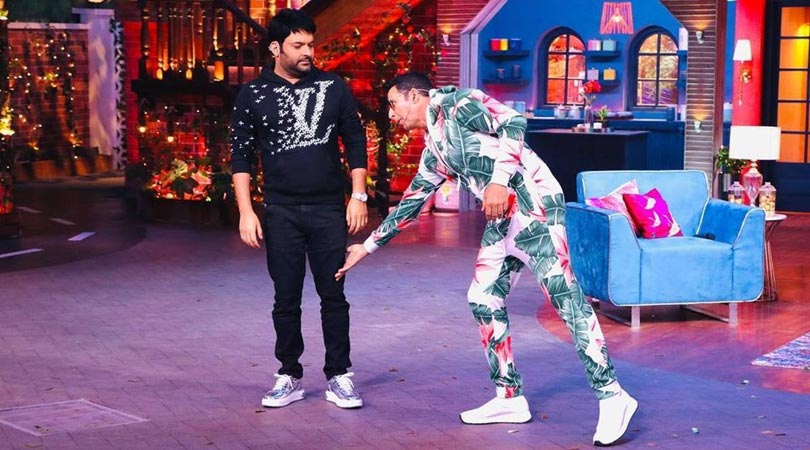 Kartik Aaryan will feature in an upcoming episode of The Kapil Sharma Show to promote his upcoming film Dhamaka, with co-stars Mrunal Thakur and Amruta Subhash. Sony Entertainment Television shared a promo on Instagram on Wednesday.

Kapil Sharma took several playful digs at Kartik, which left the actor hiding his face in embarrassment. Kapil said that after he starred in Kis Kisko Pyaar Karoon, where he had three wives, Kartik featured in Pati Patni Aur Woh, a film where Kartik was torn between his wife and secretary. Kapil added that after he announced a Netflix show, Kartik came out with a Netflix film. “Aapne soch rakha hai ki sirf top celebrities ko hi follow karenge?” Kapil asked, as Kartik couldn’t stop laughing.

Kapil didn’t stop there, he also mentioned that he was replaced by Akshay Kumar as the brand ambassador of a product he endorsed. “Akshay paaji ka toh aapko pata hai, unhone kaam chheenne mein three-year degree course kiya hua hai,” he said, adding that Kartik is the only one who has done the same thing.

Kapil quizzed Mrunal on why she has not been linked to anyone yet. He pondered on whether she is just focussed on her career, or if people were backing away because of her name. ‘Thakur saab ki beti’. She asked him to find her a partner and he replied, “Main kisi ko kyun dhoondhu?”

In Dhamaka, Kartik plays a news anchor named Arjun Pathak, who gets entangled in a devious terror plot that threatens to bring Mumbai down to its knees.