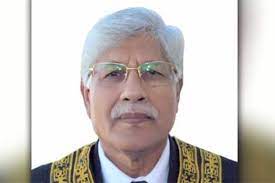 Former Chief Justice of the apex court of Giltit-Baltistan Rana Shamim, who triggered controversy by stating in a notarized affidavit that former Chief Justice of the Supreme Court Saqib Nisar directed a High Court judge against releasing Nawaz Sharif and Maryam Nawaz on bail before the 2018 general election, is attempting to leave the country; Daily Times has learnt.
Shamim’s statement prompted contempt of court proceedings at the Islamabad High Court (IHC), which issued notices to him, the journalist who covered the story, as well as the news editor and editor-in-chief of the publication that ran it.
IHC Chief Justice Athar Minallah also raised very pertinent questions, which seem to have made the affidavit legally very weak.
The court has directed the respondents to submit their replies by November 26, the date of the next hearing.