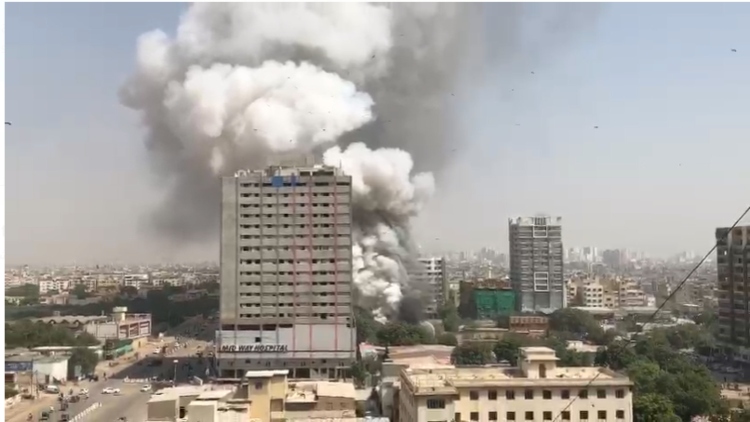 KARACHI: Fire blazed in the multi-storey building of Victoria Shopping Centre located at Abdullah Haroon Road in Karachi on Wednesday.

Fire intensified in minutes, however, the cause of the fire is yet unknown. The road to the shopping centre was closed for traffic.

A firefighting vehicle has arrived at the locality, whereas, heavy contingents of law enforcement agencies also reached the scene. The shopping centre was immediately evacuated by rescue teams.

It was learnt that the fire engulfed the fifth floor of Victoria Shopping Centre. No casualty was reported so far in the incident.

Karachi Administrator Murtaza Wahab said, “Another case of fire has been reported near Zainab Market, Karachi. The fire brigade team of KMC is present at the site to control the situation. Will keep everyone posted.”

“Besides fire tenders, snorkel is also present at site. All efforts are being made by KMC fire officers and the administration to control the situation,” he added.

On November 15, around 600 shops were affected by the fire that had broken out at Saddar’s Cooperative Market, a busy shopping area in the heart of the city.

The firefighters had doused the blaze after a six hours struggle. Ten fire tenders had taken part in the operation to control a major blaze in the shopping hub of Karachi.

Several shops, pushcarts and stalls were burnt in the fire causing losses of up to millions of rupees, however, no casualties were reported.