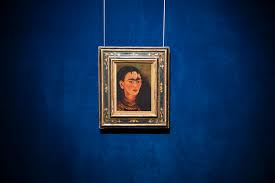 A rare painting by Frida Kahlo sold in a New York auction house Tuesday for almost $35 million, a record price for a work by the iconic Mexican artist.

At the same sale, a painting by French artist Pierre Soulages also broke a record for his work by reaching $20.2 million dollars.

As expected, the self-portrait of Kahlo entitled “Diego y yo” (“Diego and me,” 1949), where the face of the painter’s husband Diego Rivera appears on her forehead, smashed the former record of $8 million set by a Kahlo in 2016.

That made it the most expensive Latin American work of art in history sold at auction, the previous record having gone to a painting by Diego Rivera himself, whose work “Los Rivales” (1931) sold for $9.76 million in 2018.

“Diego y yo” is emblematic of Kahlo’s self-portraits, known for their intense and enigmatic gaze that made the Mexican painter, a feminist icon, famous around the world.

In the painting, Rivera’s face appears on Frida’s forehead, above her distinctive eyebrows and dark eyes from which a few teardrops fall.

The depiction of Rivera, who at the time was close to Mexican actress Maria Felix, as a third eye symbolizes the extent to which he tormented her thoughts, art experts say.

Kahlo and Rivera married each other twice. She died aged just 47 in 1954.

Soulages’ painting, which had spent more than 30 years in a private collection, corresponds to the red period of the century-old French artist.

It sold for $20.2 million after a heated battle between several bidders, some of them in Sotheby’s auction room and others on the phone, greatly exceeding the previous record reached in 2019 of $9.6 million euros in Paris.