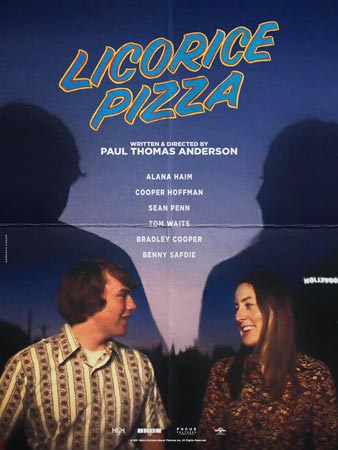 As a title for this California pastoral from the sunlit west coast 1970s, Licorice Pizza is whimsically inspired. According to writer-director Paul Thomas Anderson, it’s actually the name of a now defunct SoCal record store chain. I was hoping he was making that up, like Anthony Burgess’s supposed cockney phrase “Queer as a clockwork orange”. But no. It really did exist, though the movie itself teeters between reality and nostalgist-hallucination.

This is a love story set in 1973 and far too interesting and complicated to be called “coming-of-age”. A grinningly fast-talking 15-year-old boy meets a bored 25-year-old woman who works as assistant to a photographer taking pictures for the high-school yearbook. She is in equal parts amused, intrigued and depressed when this kid starts hitting on her, and she realises that she is somehow interested in him.

Anderson makes glorious movie stars of his two newcomers. Cooper Hoffman, son of the late Philip Seymour Hoffman, is eerily assured as Gary Valentine, a heavy-set kid with iffy skin whose child-actor career in TV and movies is coming to an end, and is therefore turning his various side-hustles into the main event, running his own cockamamie company selling waterbeds. Alana Haim, of the pop band Haim (for whom Anderson has directed videos), is superb as the permanently exasperated Alana Kane, a young woman with Barbra Streisand’s beauty and charisma; appropriate, perhaps, as Streisand’s notoriously quick-tempered onetime boyfriend Jon Peters is played by Bradley Cooper in a walk-on role, as one of Gary’s dissatisfied waterbed customers.

The love between Gary and Alana, if love it is, does not run smooth. Alana breaks Gary’s heart by holding hands with another child actor hardly older than he is; Gary infuriates Alana by putting the moves on a girl his own age. Alana retaliates by flirting with ageing movie star Jack Holden (Sean Penn), presumably based on William Holden (why not just make him William Holden?) and then uptight political candidate Joel Wachs (Benny Safdie). But we all know, even if we can scarcely believe it, where this is heading. And this hypnotically gorgeous, funny, romantic movie freewheels its way around from scene to scene, from character to character, from setpiece to setpiece, with absolute mastery. You float and ripple around it as if on a waterbed. But every casual line, kiss, automobile-ride, set-up and joke is a joy. 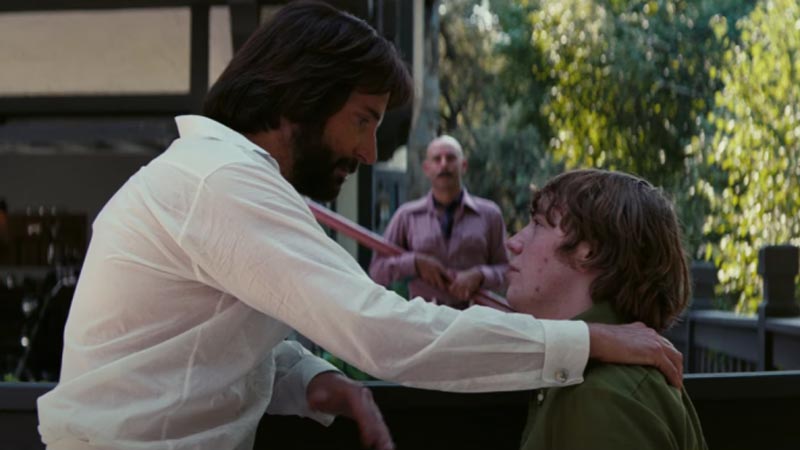 Anderson says that Gary’s character is partly based on former child actor Gary Goetzman who grew up to be Tom Hanks’s producing partner, and partly on a kid he saw in 2001 trying to chat up an older woman in high school. Why did he reposition the story in 1973? Well, he is superb at evoking that era; perhaps an allusion to Harold and Maude is intended, though the nearest thing to cinematic quotation is a scene weirdly close to the political campaign office moments from Taxi Driver. Yet could it be that Anderson has chosen the 1970s for what many suggest was Jonathan Franzen’s motivation in choosing that era for his new novel Crossroads? Backdate your story to the disillusioned-yet-still-groovy 70s and it’s easier to explore issues of transgressive love and sex in the right mood of tolerant romantic adventure without getting bogged down in 21st-century gender politics?

Maybe. The ironising 70s might also, incidentally, make it easier to get away with the perennial male fantasy of the teen boy entrancing an older woman (yeah right). The setting certainly allows characters to drive very, very fast to places where they drink very, very large amounts of alcohol: in fact, the driving scenes are rather like those in Quentin Tarantino’s LA-period film Once Upon a Time in Hollywood, and whereas Tarantino had crazy Charlie Manson, Anderson has freaky Jon Peters smashing up cars. There’s also a cinephile fetish-moment where Gary and Alana wind up in front of a movie theatre marquee advertising Live and Let Die (although Edgar Wright got there first with his vision of the Thunderball premiere in Last Night in Soho). We get jukebox slams of Paul McCartney’s Let Me Roll It and David Bowie’s Life on Mars, and in this film we do indeed see LAPD lawmen beating up the wrong guy: Gary.

Licorice Pizza is released on 26 November in the US and on 7 January in the UK.