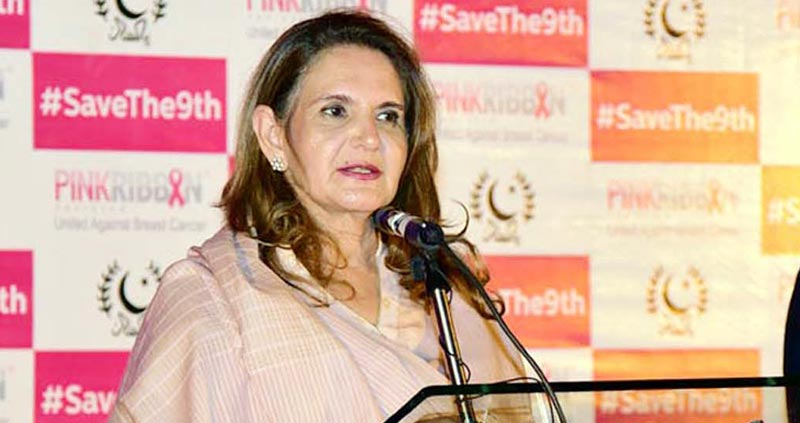 First Lady Begum Samina Alvi on Tuesday said that as many as 100,000 women were reported to suffer breast cancer in the country annually and one out of every eight women suffered from the disease.

She expressed these views while addressing a seminar on ‘Breast Cancer Awareness, Empowered Women and Special Persons’ at Sardar Bahadur Khan Women’s University (SBKWU) here as a special guest.

Vice Chancellor of the University Prof. Dr. Naheed Haq welcomed the first lady on her arrival and highlighted the teaching and learning process, breast cancer awareness measures and the overall performance of the university.

Addressing the ceremony, Dr. Samina Alvi said that increasing cases of breast cancer in Pakistan were alarming, adding the disease was a silent killer which could be fatal if not diagnosed on time.

Most Women due societal values were unable to talk to their families about breast cancer, she said, adding in cases of breast cancer, it had come to light that besides women over 40 years of age, young girls were suffering from the disease.

She further stated that the aim was not only to celebrate a specific day but also to promote awareness about the disease.

The first lady appreciating the participation of women with disabilities in the seminar said that it was our moral and social duty to implement job quota for disabled persons in central and provincial departments with the aim to provide them equal opportunities.

She said that the government was taking serious steps to empower women economically and financially and they were being given loans at low markup for businesses.

Samina Alvi said that women had a key role to play in the economy of the country and their effective representation in all spheres of social decision making was a sign of progress.

She said that only a healthy woman gave birth to a healthy society, adding it was a matter of concern that 100,000 cases of breast cancer were being reported annually in the country.

People from all walks of life, including the media had to play their part in raising awareness about breast cancer, she added.

Samina Alvi said “We all have to work together for the disabled persons and there should be a ramp for them in all the institutions.”

She said that in the past, special people were ignored but now serious measures were being taken for their welfare.

At the end of the seminar, Prof. Dr. Naheed Haq, presented a souvenir and traditional shawl on behalf of the university to Begum Samina Alvi.