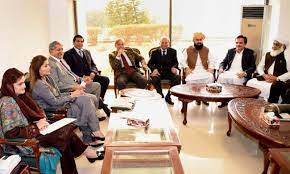 Shahbaz Sharif, the leader of the opposition in the National Assembly, spoke on the phone with many other opposition leaders on what to do next and how to oppose the government’s legislative objectives in the forthcoming joint sitting of Parliament.

He expressed his appreciation for the united efforts of the opposition in parliament and thanked them for their cooperation.

With Bilawal, Shahbaz discussed parliamentary issues and matters of common and national interests. The two leaders discussed the joint session of Parliament as well and the opposition’s future strategy.

The anti-people policies of the selected PTI-led federal government had been reversed through Parliament, which was the apex democratic forum, Bilawal told Shahbaz. He said Parliament was the only democratic forum for the elected representatives to legislate on people-friendly policies and laws, as they uphold the interest of the common man there.