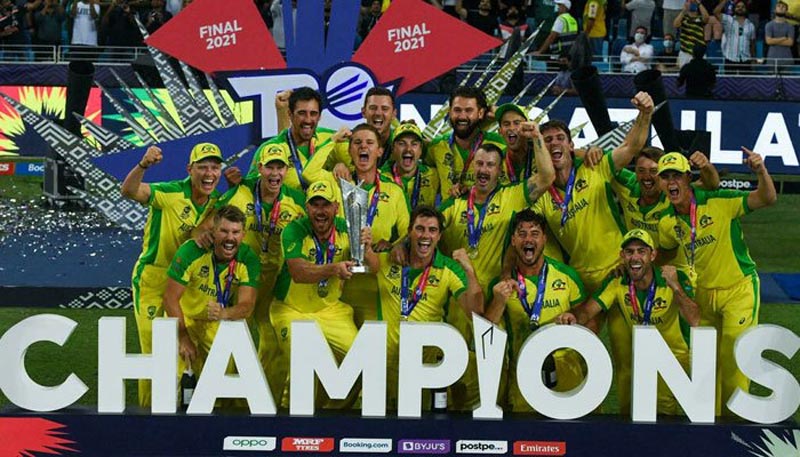 SYDNEY: Australia hailed the nation’s maiden Twenty20 triumph as “the ultimate World Cup heist” Monday, revelling in the team regaining their “mojo” heading into a blockbuster Ashes series against old enemy England. Mitchell Marsh’s unbeaten 77 steered Justin Langer’s side to an emphatic eight-wicket defeat of New Zealand in Dubai on Sunday to clinch a title that had long eluded them. Chasing 173 for victory, Australia achieved their target with seven balls to spare on the back of a 92-run second-wicket stand between Marsh and David Warner, who made 53. It was a sterling performance from a team that went into the tournament beset by poor form, having lost their most recent Twenty20 series 4-1 in Bangladesh in August, minimal game time and dressing-room discontent, with few pundits giving them much hope. “Australia has pulled off the ultimate World Cup heist — written off as no chance, Justin Langer’s men defied the odds to seal their maiden title in devastating fashion,” said the Sydney Daily Telegraph. Lifting the trophy for the first time was an ominous signal ahead of the five-Test Ashes series, which starts in Brisbane on December 8, something not lost on Australian media. “England beware! Australian cricket has got its mojo back,” screamed The Australian newspaper. “To say that Australia’s stunning T20 World Cup win will have no bearing on the Ashes is to underestimate the rousing mental euphoria generated by such a win.

“After a winter of grumbling and years of so-so results, Australia suddenly feels alive, armed and dangerous again,” it added. The core of the T20 team will also spearhead Australia’s Ashes campaign, including Warner, Steve Smith, Pat Cummins, Mitchell Starc and Josh Hazlewood. They are due to return to Brisbane imminently on a charter flight with England’s Ashes players who were also involved in the T20 World Cup, where they lost to New Zealand in the semi-finals. According to English media, fast bowler Mark Wood said it was a journey he “wasn’t looking forward to”, worried that the Australians would “wave the trophy around”.

‘Poking the bear’: While Marsh stole the headlines for his swashbuckling 77, a major factor in Australia’s success in the United Arab Emirates was the return of Warner to his destructive best. He went into the tournament after being sidelined by his Indian Premier League team Sunrisers Hyderabad and with some commentators suggesting he was past his best. But the gutsy opener responded by plundering 289 runs over seven innings to be named player of the tournament as he warmed up to face England in devastating style. “I can’t believe people wrote him off a couple of weeks ago saying he was done,” skipper Aaron Finch told Australian reporters. “It was like poking the bear.”

While Australia celebrated, New Zealand media lamented the Black Caps falling to a third straight defeat in the final of a limited-overs tournament. But the New Zealand Herald’s Niall Anderson said there could be no complaints, unlike the 2019 one-day World Cup loss to England, which was decided by a boundary countback after scores finished tied after 20 overs and a super over shootout. “There is nothing controversial to point to and explain the defeat. No obscure rule, no moment where the game could have turned, no reason for New Zealand to feel aggrieved,” he wrote. “Instead, there was a simple fact that all in the Kiwi camp had to acknowledge — Australia were simply better. Much better.”