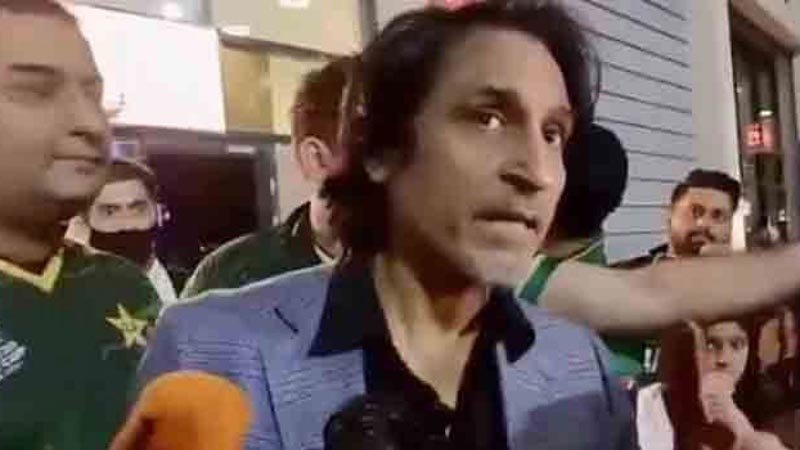 LAHORE: A video of Pakistan Cricket Board (PCB) Chairman Ramiz Raja chiding the Dubai International Cricket Stadium’s security has gone viral on the internet. In the video, the PCB Chairman can be seen speaking to Pakistani reporters when he turns away from the media to speak to the security personnel stationed at the stadium. “Excuse me, just give me two minutes, okay?” says Ramiz. “Just give me two minutes, fine? Wait. Wait. Wait, this is the press of Pakistan, just give me two minutes,” he added. From the looks of it, the PCB chairman was chiding the security staff of the stadium for telling the reporters to move away from the stadium. A reporter can be heard immediately thanking the PCB chairman: “Thank you Ramizbhai.”

During his media interaction, Ramiz praised Babar Azam for “owning the team”, adding that the team responded well to the Pakistani batter. Raja credited the team for their hard work, adding that whenever he speaks to the team, he does so as a cricketer. “Whenever I talk to them, I talk to them as a cricketer not as a Chairman. I hope they understand what I try to tell them about cricket and they understand the importance of unity, nationalism and they should never be discouraged after losing,” he added.

Speaking about fast bowler Hassan Ali, Ramiz said it is difficult for a player to escape such an episode or “nightmare”.”If I was in his place, I would double my fielding efforts,” he said. “He should try not to think much about it. Everyone makes mistakes. I dropped several catches, it is not the end of the world,” he added. The PCB chairman heaped praises on Mohammad Rizwan, saying that he had shown to the world what nationalism and playing for the country means.

When a reporter asked the PCB Chairman whether he was missing the commentary box or not, Ramiz quipped” Don’t ask.”When another reporter commented on the positive language by the Pakistan cricket team and said it looked as if “the players were not under any tension from the board”, Ramiz Raja said:”As long as I am here, players will not have any tension,” he added, as fans of Pakistan cricket cheered around him.