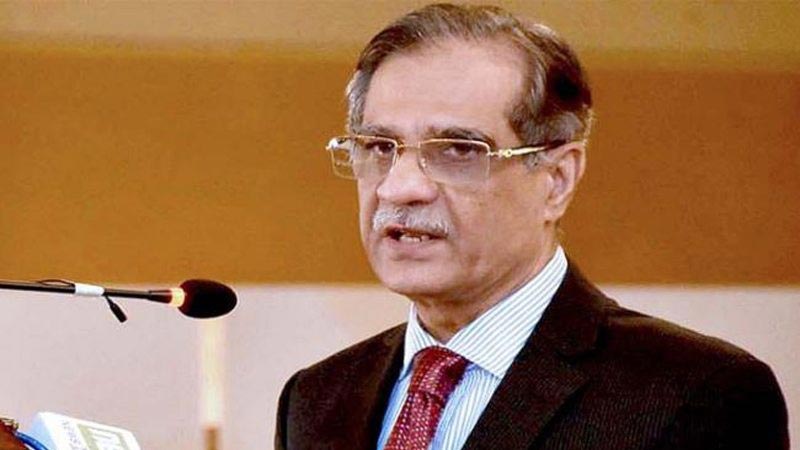 Former chief justice Saqib Nisar on Monday said that the accusations levelled against him by the former chief justice of Gilgit Appellate Court Rana M Shamim were ‘contrary to the facts’. Speaking to media, Nisar, who ordered the formation of a joint investigation team (JIT) in the Panama Papers case that led to the disqualification of then prime minister Nawaz Sharif, said he didn’t want to respond to the ‘plain lies’ of the ex-GB chief justice. Nisar said that Shamim had asked him for an extension but he didn’t accept his request, adding that the ex-GB CJ had also complained to him about the same. The former CJP was responding to media reports that Nawaz and Maryam were kept in jail till the general elections in 2018 on the orders of Saqib Nisar. In response to this claims, President of Pakistan Muslim League-Nawaz (PML-N) Shehbaz Sharif said, “Allah has His own way of revealing the truth.” Information Minister Fawad Chaudhry took exception to this report and said it was an “absurd” story by the journalist. Taking a dig at the report, the minister said as per the news item, a Gilgit judge claimed that the former CJP told a High Court judge not to grant bail to Nawaz Sharif and Maryam before the elections.

Reportedly, these remarks were made when Nisar was having tea with the G-B top judge, Fawad said, questioning that why would Saqib Nisar discuss such a thing on the phone in front of someone and that too while he was having tea. Fawad said that “jokes in the name of news” were being circulated in the country to prove that Nawaz Sharif is a victim. “Instead of fabricating conspiracy theories, the Sharifs should provide money trail for the Avenfield Apartments,” he said, adding that Maryam had claimed that “she did not own any property but it has emerged that she’s the owner of property worth billions”.