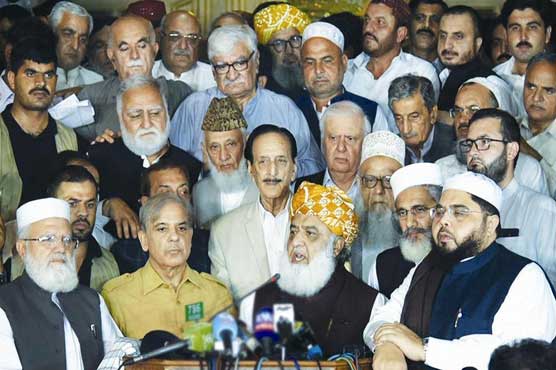 ISLAMABAD: On Sunday, the joint Opposition in the Parliament urged the National Assembly Speaker Asad Qaiser to form a new parliamentary committee to review laws, including those relating to electoral reforms.

The opposition demanded this during a virtual meeting of the Opposition parties held in the Parliament. The meeting was convened to deliberate on the National Assembly speaker’s letter in which he had invited the Opposition for talks on electoral reforms.

The parties, however, have decided to cooperate with the government on important legislation at the joint sitting of the Parliament.

Meanwhile, replying to the letter of the National Assembly speaker, Leader of the Opposition in the National Assembly, Shahbaz Sharif, wrote that the Opposition will support the government on important legislation, but asserted that it would not cooperate on the passage of bills that benefit individuals, said a declaration issued after the steering committee meeting.

Shahbaz Sharif said we will nver accept the government’s one-sided agenda, urging the government to formulate laws after building consensus through consultations in view of public interests and suggested the constitution of a new parliamentary committee to review laws including those relating to electoral reforms.

He wrote in the letter that the bills, passed by the National Assembly, and not by the Senate that were sent to the joint sitting, should be considered by the new committee.

“We believe that consensus is needed on issues of national importance and that parliamentary procedures and traditions should be adopted,” the letter said. The letter said the speaker had also formed a committee on legislation on June 23, 2021. The committee was to consider 21 draft laws, passed by the National Assembly on June 10, 2021.

The letter said that three sessions of the committee were held on June 9, August 30 and Sept 9, whereas no session was held during the past eight weeks. The Opposition leader said that due to the non-cooperation of the government lawmakers, the terms of reference of regulations could not be finalized, and meanwhile the legal term of proposed drafts had expired or Senate had rejected them.

The Opposition leader, in the letter, said the proposed draft legislation had been referred to the joint sitting of the parliament and in which case the purpose of the committee formed earlier on June 23, 2021 by him had been lost.

The letter further said that national interest, especially legislation with a wide-ranging impact on people, should be based on consensus and consultation. Shahbaz Sharif proposed that the parliamentary committee, constituted by the speaker, should prepare a package of electoral reforms including the Elections (Amendment) Bill, 2021 with consensus.

The speaker, on orders of the prime minister, had sent a letter to the Opposition in the National Assembly, seeking their cooperation in legislation at the joint sitting of the Parliament.

The Opposition also suggested that the new parliamentary committee should be constituted based the committee formed on July 25, 2014. The letter said the bill passed by the National Assembly, and not by the Senate, and sent to the joint sitting, should be considered by the new committee.

The Opposition parties asked the government to ponder over the recommendations, tabled by the committee comprising legislators from both houses of the Parliament.