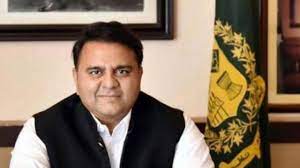 In a tweet, he said he had read a strange news item from senior journalist Ansar Abbasi.
The minister said as per that news item, a Gilgit judge claimed that when he was having tea with former Chief Justice Saqib Nisar, the CJP instructed a High Court judge on the phone not to grant Nawaz Sharif bail before the elections.
Fawad said that strange jokes were being circulated in the country to prove Nawaz Sharif a victim.

He said it was ludicrous claim that a judge having tea, sitting in front of the phone and issuing such instructions in front of a visitor whether to take the bail of an accused or not and the accused was not a common man either.

Instead of fabricating silly stories and conspiracy theories, the Sharifs should provide money trail for the Avenfield Apartments, which were later given to Maryam Nawaz. he said. Fawad said that Maryam had claimed that she did not own any property even in Pakistan what to speak of London.