‘Self Esteem’ — rallying cries from a woman reborn 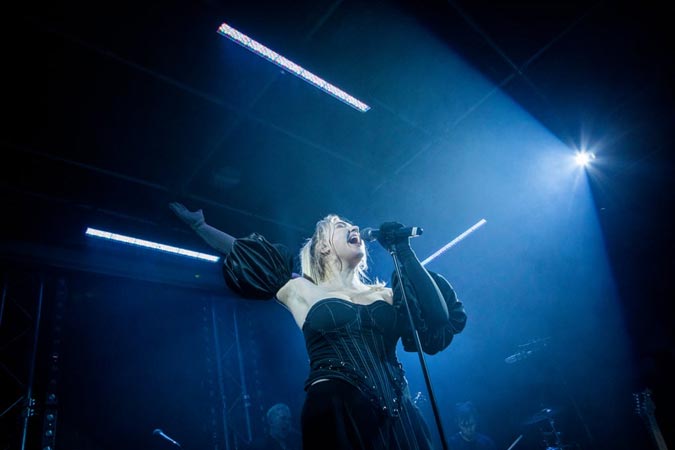 It’s only the first song of the night, but half the crowd are baying like dogs. Delirious enthusiasm is, of course, the correct response to Self Esteem’s maximalist pop.

A few hundred people are crammed into what may be the last of Sheffield-bred singer-songwriter Rebecca Lucy Taylor’s many jaunts around the bijou venues of Britain, as Self Esteem and in previous bands. Taylor has recently released her second solo album, Prioritise Pleasure, an audacious hymn to self-actualisation and dreaming big, to rave reviews. Next year, Self Esteem is booked to play Manchester Cathedral.

But the din, more suited to the peak of the encore, comes much earlier, at the close of the set-opener, I’m Fine. In a sample, a young woman describes warding off unwanted male attention by barking like a dog because “there is nothing that terrifies a man more than a woman that appears completely deranged”. The wolf noises that break out tonight are an echo of recognition – of the lunatic things women have to do to cope with the craziness of male threat. It feels so good, too, when your pack gives tongue.

Taylor is a solo female whose flag of reckless good sense waves so high and so proud, you would strongly consider following her into battle. Her two albums as Self Esteem tell of how one woman shook off the torpor of a life wasted trying to please other people and decided to please herself instead. She’s too Sheffield to have a song called Carpe Fucking Diem, but she might as well have.

Her works are like Thelma and Louise without the tragic ending, an invitation to anyone unhappy with their lot to stop being pliant – to “be braver”. Her music throws Robyn, Britney and Charli XCX into a blender. Set to dramatic electronics, I’m Fine deconstructs a toxic relationship. “I won’t rein in my need to be completely free!” Taylor staccato-chants, backed by three dancing vocalists – Marged Sion, Levi Heaton and Seraphina D’Arby – bassist and keyboard player Sophie Galpin and drummer Mike Park.

For Taylor specifically, being free meant coming out – she is bisexual – to her parents, exiting unhealthy relationships and leaving the unthreatening indie band she’d been in for a decade – Slow Club. She came out again – as a lover of big, bold pop sounds and the heady slink of R&B.

Out went earnestness and underdressing, in came head-flicking 1990s R&B dance routines, huge choruses and – on this latest album – nods to hyper-pop and the production work of Kanye West. A recovering indie kid, Taylor did not dumb down to pop dynamics: she smartened up to them, making arena-sized tunes out of the bleak, wry things women confess to one another in whispers.

“What I might have achieved if I wasn’t trying to please,” she sings on Rollout, a song that heralded her debut solo album, Compliments Please. As with so many of her tunes, it finds Taylor looking back on a relationship. But it speaks volumes, too, about her creative dissatisfaction in a middlingly successful outfit, being told how to present herself by the industry – yes, the notionally less cut-throat indie industry – playing the same venues year after year, her wit and ambition stifled by groupthink. Of Gorilla, she says: “I’ve had some miserable times here, so it’s quite profound to be playing here tonight.”

That relief is in the songs. Moody, from Prioritise Pleasure, is a rallying cry to all “difficult” women. I Do This All the Time is a spoken-word outpouring in which Taylor parrots comments said to her in her career. “You’re a good…sturdy… girl,” she says, pausing dramatically, the pain of it transformed by her biceps flexing.

All her rage, lustfulness, regret and joy barely fits on the stage; it’s an arena-sized performance in a shoebox. Taylor’s backing singers cluster around her, a tableau of succinct limb movements, moving sideways in step, then dissolving away. A fan billows Taylor’s hair as she strikes pose after pose, only semi-ironically.

Removing her shoulder-length black gloves, she wonders whether “Rita Ora has a glove tech”. When the crowd shout her granular confessionals back at her, Taylor whoops “I’m Robbie Williams!” There are echoes here too of early Christine and the Queens. Heloïse Letissier was given a new lease of life by drag artists; part of the catalyst for Taylor’s rebirth was watching RuPaul’s Drag Race. Tonight’s support act is drag artist Ash Kenazi.

The clincher, though, is the quality of Self Esteem’s tunes. Many of these songs sound as though they were constructed by committee at an LA writing camp. In fact, they were all penned by Taylor and produced alongside Johan Karlberg. Her pre-choruses are on point, her synths stabs emphatic; every chorus is a triumph.