* Kanye speculated that some people close to Kim may be 'plants' who are trying to turn her against him, quoting a hypothetical one as saying, 'Hey Kim, oh, don't listen to Ye' 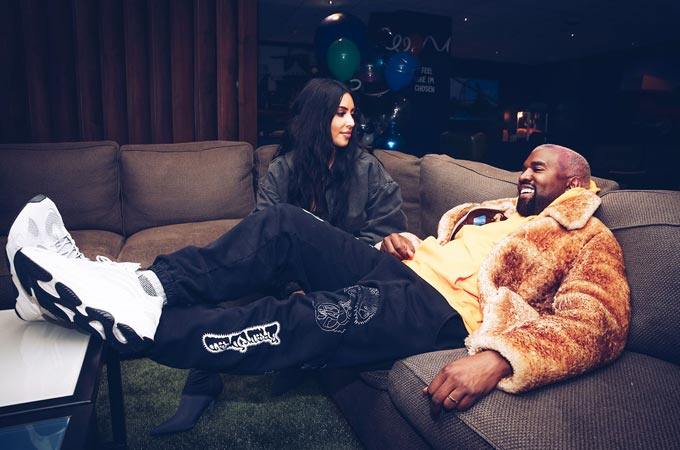 Divorce or no divorce, Kanye West wants his family to stay together. In the second part on his interview on Revolt TV’s Drink Champs podcast, released on Thursday, Nov. 11, Ye reiterated his thoughts about Kim Kardashian and their four children-North West, 8, Saint West, 5, Chicago West, 3, and Psalm West, 2-in wake of the reality star’s divorce filing in February.

Kanye speculated that some people close to Kim may be “plants” who are trying to turn her against him, quoting a hypothetical one as saying, “Hey Kim, oh, don’t listen to Ye, he’s so crazy.”

“But at the end of the day, I ain’t got the paperwork yet,” he said, “so I’ma come on this joint and try to save my family and keep my family together.”

Kanye, who filed a response to Kim’s divorce filing-seeking joint custody of their kids, made similar comments in previously released footage from the on-camera Drink Champs podcast. At the time, he called Kim his “wife” and said, “I ain’t never even seen the papers, we’re not even divorced…That ain’t no joke to me. My kids want their parents to stay together. I want us to be together.”

In the newly released segment of the podcast, Kanye also referred to Kim as his wife.

The two had lived separately for a while prior to her divorce filing, with Kim and the kids in their mansion near Los Angeles and Ye in Wyoming. On the podcast, he said he had two ranches there. In October, Kanye listed one of the properties for sale for $11 million.

Also on the second part of the podcast, Kanye talked about helping Kim prepare for her SNL hosting debut last month as well as the reality star’s journey to become a lawyer, the same profession as her late father, Robert Kardashian, who the rap artist referred to as his “father-in-law.”

“I was giving ideas for skits for SNL and my wife was in a session with the lawyer that’s training her and the lawyer got on the phone and started making bad suggestions and I was like, ‘Man, this dude’s an idiot,'” he said. “They got an idiot training my wife. She’s gonna fail the bar the third time because I feel like there’s people who might not want you. They don’t want you! There’s people who might not want Kim Kardashian to become a lawyer.”

Kim, who is not enrolled in law school but is studying on her own to try to become a lawyer, has not responded to Kanye’s remarks. She revealed on the Keeping Up with the Kardashians series finale in June that she had failed the “baby bar,” or first-year law students’ exam, twice.

“Because you know what happens when Kim Kardashian becomes a lawyer?” Kanye continued. “That shirt gets a little bit higher, that cleavage gets a little more covered up. It’s 14-year-old girls, 17-year-old girls that’s posing a little bit. They wanna become a lawyer. She affect people in that way. And there’s people that don’t want her to affect these women in that way. They want her to affect them in that other way. And they could put you a lawyer that gives you all the right things and just enough wrong things that you just miss your test by this much. You’ll get ’em next time.”

Also on Drink Champs, Kanye spoke about his mental health. Ye, who was hospitalized in 2016 for mental exhaustion, rapped about having bipolar disorder on his 2018 track “Yikes.” He later said on TMZ Live he was “off of medication.”

“We all are on the spectrum somewhere,” Kanye said on the Drink Champs. “Just only a couple of us went to the hospital or have been diagnosed with medication.”

He continued, “You all not gonna diminish what I’m doing and what God is doing with me in the future by trying to cut my legs off or cut my influence off by calling me crazy. That don’t work. They’d be like, ‘You need your meds. You’re not in your best mental state right now.’