Amid tensions, Biden and Xi to hold virtual summit on Tuesday 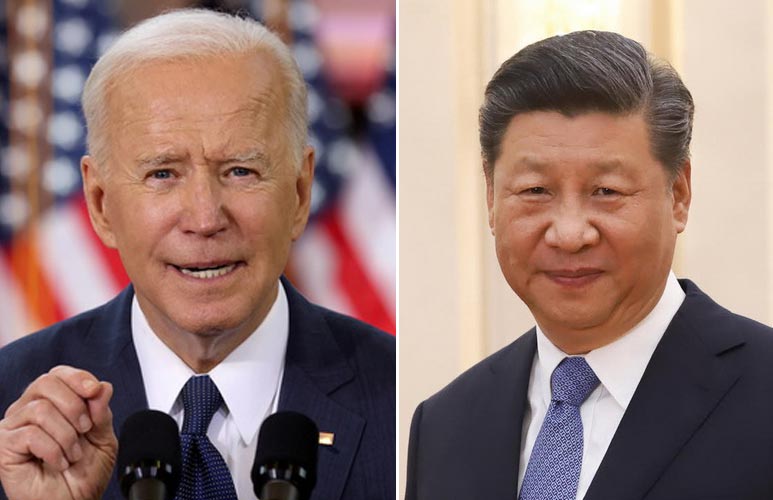 US President Joe Biden will hold a hotly anticipated virtual summit Monday with his Chinese counterpart Xi Jinping, as tensions swell and both sides indicate they will not give ground on flashpoint issues.

Relations between the world’s two largest economies have recently deteriorated, in particular over Taiwan. “The two leaders will discuss ways to responsibly manage the competition between the two countries as well as ways to work together where our interests align,” White House Press Secretary Jen Psaki said in a statement Friday. “Throughout, President Biden will make clear US intentions and priorities and be clear and candid about our concerns with the PRC,” Psaki said, referring to Beijing by the acronym for the People’s Republic of China.

The virtual talks will take place “in the evening” Monday in Washington – meaning early Tuesday in Beijing, she announced.

Biden and Xi have talked by phone twice since the veteran Democrat moved into the White House. The pair also met extensively when Biden was Barack Obama’s vice president, and Xi was vice president to Hu Jintao.

Biden had hoped to meet Xi at a recent G20 summit in Rome, but the Chinese leader has not traveled since the start of the Covid-19 pandemic and instead agreed to virtual talks by the end of the year.

“I’ve noted repeatedly, over the past 10 months, that the relationship with China is among the most consequential and also most complex that we have,” US Secretary of State Antony Blinken said Friday. “It has different elements in it — some cooperative, some competitive and others adversarial and we will manage all three at the same time.”

Chinese Foreign Minister Wang Yi and Blinken on Saturday had a preparatory phone call for the summit.

Wang told his counterpart that “the two sides should meet each other halfway” at the Xi-Biden meeting, the Chinese foreign ministry said. Wang also told Blinken that Washington should stop sending “incorrect signals” on Taiwan’s status.

“Specific deliverables” were unlikely from the summit, White House spokeswoman Psaki said. Washington instead sees the meeting as a way of “setting the terms, in our view, of an effective competition.” Such “intense competition” in the bilateral relationship required “intense diplomacy,” Psaki said.

She told reporters: “The president is certainly not going to hold back on areas where he has concern.”

The US president has largely kept the tougher approach on Beijing of his predecessor Donald Trump, with both administrations considering a rising China as the top challenge of the 21st century.

On Thursday, Biden signed into law a measure aimed at preventing companies such as telecom giant Huawei from getting new equipment licenses from US regulators, in Washington’s latest effort to crack down on Chinese tech firms.

Also Thursday, Xi warned against a return to Cold War-era divisions, in remarks to a virtual business conference on the sidelines of the Asia-Pacific Economic Cooperation summit. “Attempts to draw ideological lines or form small circles on geopolitical grounds are bound to fail,” he said. “The Asia-Pacific region cannot and should not relapse into the confrontation and division of the Cold War era.”

But the two countries, also the top two carbon emitters in the world, agreed this week to work together to accelerate climate action this decade.

Another issue that could come up in Monday’s talks is the upcoming Winter Olympics in Beijing — CNBC reported, citing unnamed sources, that Xi was expected to extend a personal invitation to Biden.