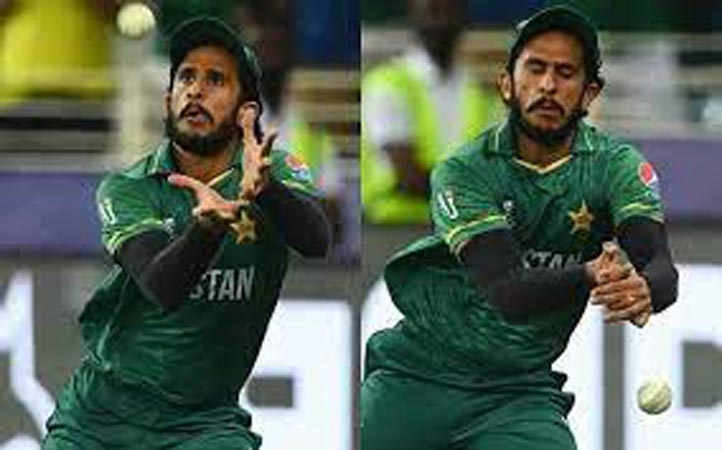 DUBAI: Pakistan captain Babar Azam offered consolation to teammate Hasan Ali whose costly mistake in the field allowed Matthew Wade to secure Australia’s thrilling victory in the Twenty20 World Cup semi-final on Thursday. Having conceded 44 runs in four wicketless overs, Hasan had more disappointment to face in the dramatic closing stages of the see-saw match at the Dubai International Stadium. With Australia needing 22 runs off the last two overs, Wade took a wild swing at Shaheen Shah Afridi’s third ball and sent a skier towards Hasan who spilled the catch on the leg-side. Wade responded by hitting three sixes in a row to complete an excellent chase against the tournament’s form side.

“If the catch was taken then the scenario would have been different but it is part of the game,” Babar told reporters. “He is one of my main bowlers and he has won many matches for Pakistan. Players drop catches but he is a fighter and I will back him. “Everybody doesn’t perform every day. There is a day when one performs. It was just not his day. He is down and we will lift his mood.” Babar felt 176-4 after being put into bat was a decent score by the 2009 champions.

“We started off well with a good total but unfortunately the finish wasn’t good,” Babar said. “The way we played the tournament and boys fought, I keep the belief that we will continue with this.” A team doctor revealed opening batter Mohammad Rizwan, who top-scored for Pakistan with 67, had spent two days in hospital following a chest infection before being declared fit for the semi-final. Vice-captain Shadab Khan also voiced support for Hasan, calling him a champion and urging fans not to resort to “personal attacks” against him in an Instagram post hashtagged #We Stand With Hasan Ali. “To all the fans, everyone goes through tough times, we are all human beings capable of errors. Remember the joy Hasan has given you, don’t do personal attacks please. He is Pakistan’s match-winner,” Khan wrote.