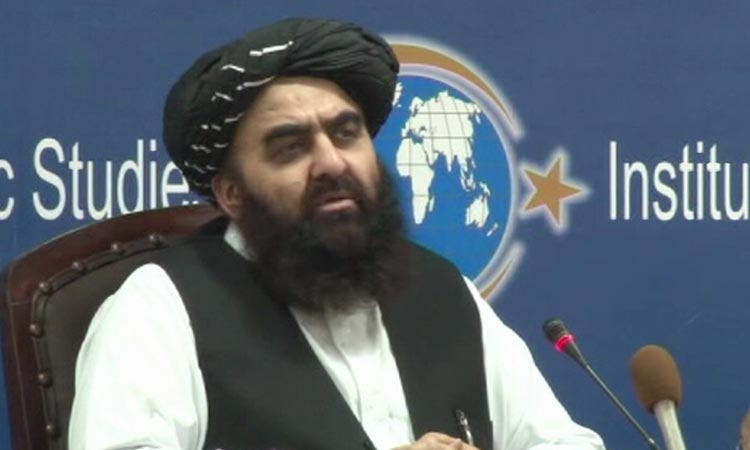 Addressing a seminar in Islamabad, Muttaqi confirmed his role in mediating peace talks between both sides. “Kabul hopes there is further progress in the coming days in negotiations between the two sides,” he added.

Muttaqi denied the presence of anti-Pakistan elements in his country, assuring that the Taliban-led government was making all-out efforts to ensure that Afghan soil was not used against any country.

To a question about the rest of the world recognising the Taliban government and allowing women to work, Muttaqi acknowledged that initially, the Taliban government had announced conditions for women to be able to work. He confirmed that 75 percent of the girls in the country, after a hiatus following the takeover of Kabul, have returned to schools. He pointed out that it was ‘contradictory’ of the international community to emphasize women’s education, but have little focus on the salary of teachers, as the disbursement was getting difficult due to the freezing of the country’s assets.

He mentioned the negative campaign in foreign media against the interim government of Afghanistan, terming it contrary to the facts.

In this regard, he mentioned that the 500,000 civil servants were now being paid and not a single person was fired on the basis of political views. Also, no woman was removed from her job or the salary was cut. He said Afghanistan had around 3,000 clinics and hospitals, which were still operational. Muttaqi said there was no rationale behind the sanctions imposed by the “international human rights champions” on Afghanistan by freezing the assets.

He said the reforms, which the international community wanted the interim government to work towards, could be done “peacefully, and not through pressure tactics”.

He said the current cabinet with all ethnicities already fulfilled the requirement of the international community for an inclusive government. “We are being punished for something which is a possibility in the future,” he said.

Muttaqi said his government wanted Afghanistan to be no more a conflict ground for major powers. Afghanistan, he said, for the first time in 43 years had a central, responsible, and sovereign government which had control on every inch of the territory. “We, in Afghanistan have a historic opportunity to create a win-win situation for everyone. The new developments have opened new opportunities for stability,” he said.

Muttaqi, who arrived here on Wednesday leading a delegation shed light on the new developments in Afghanistan besides expressing views on the new “balanced” foreign policy and relations with Pakistan.