* On Thursday's episode of 'This is Paris' podcast, Reum shared, 'It is definitely going to be your fairytale wedding' 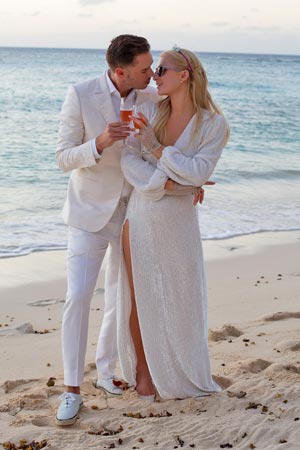 “Paris selected her dress late last night,” a second source says. “There is a lot of love and support surrounding both Carter and Paris.”

On the Nov. 11 episode of the This is Paris podcast, Reum shared, “It is definitely going to be your fairytale wedding,” adding, “That first kiss and that first hug and as we always say, the electric bolts that are going to shoot between us-I’m going to think about all those memories.”

Hilton revealed she was most “nervous” for the first dance. “I have not had a free second,” she explained ahead of the big day. “I did dancing lessons twice; it’s just hard.” The bride had previously hinted that the couple’s wedding would be an unforgettable event during an August episode of The Tonight Show.

“It’s going to be, like, a three-day affair,” she told host Jimmy Fallon at the time. “We have a lot happening…Lots of dresses, probably 10. I love outfit changes.”

As fans will recall, the venture capitalist popped the question with a custom Jean Dousset diamond ring in February during a trip to a private island for the businesswoman and DJ’s birthday.

“When you find your soulmate, you don’t just know it. You feel it,” she wrote on Instagram at the time. “My love & I have been together since our first date, and for my birthday, he arranged a special trip to tropical paradise. As we walked to dinner along the beach, Carter led us to a cabana adorned with flowers and dropped to one knee. I said yes, yes to forever. There’s no one I’d rather spend forever with.”

During an episode of The Trend Report with Mara Schiavocampo, Hilton revealed that she and Reum had known each other for 15 years but that things didn’t turn romantic until they celebrated Thanksgiving together in 2019. “We just started talking, he got my phone number and we were flirting that day,” The Simple Life alum recalled. “We went back for dinner that night.

I just saw how sweet he was with his mom, we were talking more and I just felt, like, this really amazing connection.

And then we had our first kiss and then our first date two nights later and then we’ve literally been inseparable ever since.”

From posting pictures of her engagement party to sharing snapshots of her bachelorette bash and bridal shower, Hilton has kept fans updated every step of the wedding-planning process. In fact, fans can watch her road to the altar in Paris in Love, which dropped on Peacock on Nov. 11.

“I feel so blessed to have found the love of my life at the perfect time,” Hilton previously raved to E! News. “He is everything I have ever hoped and dreamed of. Loyal, kind, romantic, handsome, thoughtful, caring, brilliant and perfect for me in every way. I truly believe that everything in life happens for a reason and that we were always meant to be.”