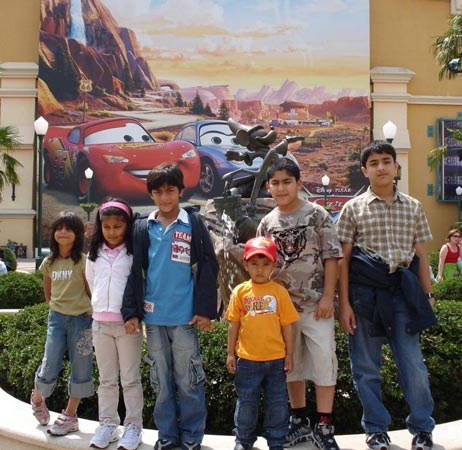 Actress Juhi Chawla dug out an old throwback picture from her drawer of memories as she took to Instagram on Friday to send birthday wishes to Shah Rukh Khan’s son Aryan Khan.

She penned a beautiful note as well with the picture and revealed that she will be planting 500 trees in Aryan’s name. In the picture, we saw a young Aryan Khan, Suhana Khan, Jay Mehta, Janhvi Mehta, and Arjun Mehta posing together against a poster of the animated children’s film ‘Cars’.

In the caption, she wrote, “Here’s another one from our personal album for today’s special occasion…Happy Birthday Aryan! Our wishes in all these years remain the same for you, may you be eternally blessed , protected and guided by the Almighty. Love you. 500 trees pledged in your name!”

For Aryan Khan’s birthday, Suhana had shared a picture another throwback picture of herself and Aryan from their childhood.

Aryan Khan, who was recently granted bail in the drugs case, appeared before Narcotics Control Bureau (NCB) on Friday, to mark his weekly presence before the agency.

For the unversed, the star kid was granted bail in the drugs on cruise case by Bombay High Court after he was arrested by NCB officials on October 3.