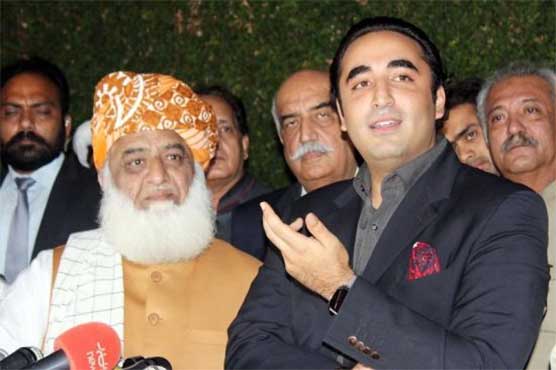 Although, signs of a thaw have emerged between the Pakistan Democratic Movement (PDM) and Pakistan People’s Party (PPP) as they both have established contact after many months.

However, Bilawal Bhutto Zardari will call on PDM President Maulana Fazlur Rehman at his residence in Islamabad today supposedly for consultation regarding the existing political situation in the country.

Furthermore, both the leaders will also discuss the ‘internal situation’ of the Parliament and consider a joint strategy.

Moreover, according to the source, Bilawal Bhutto will take Maulana Fazl into confidence over ‘in-house’ change.

Earlier, the PPP had parted ways with the PDM in April this year alleging PDM parties had been leveling serious allegations against each other amid the show-cause notice controversy.

Bilawal had then said: “We believe in politics with mutual respect and trust. The same ideology we follow within the alliance politics. The PPP CEC demands an unconditional apology to ANP [Awami National Party] and PPP for this obnoxious conduct. The PPP stands by ANP in this regard and we will not abandon them under any circumstances.”

JUI-F leader Maulana Ghafoor Haidri had called the PPP move ‘political suicide’, ‘blessing in disguise for PDM’ and kind of support to the PTI government, while PML-N vice president Maryam Nawaz had said JUI-F and PDM chief Maulana Fazlur Rehman would have a final word on its fate after the PPP’s response.