Afghanistan ‘at brink of economic collapse’ 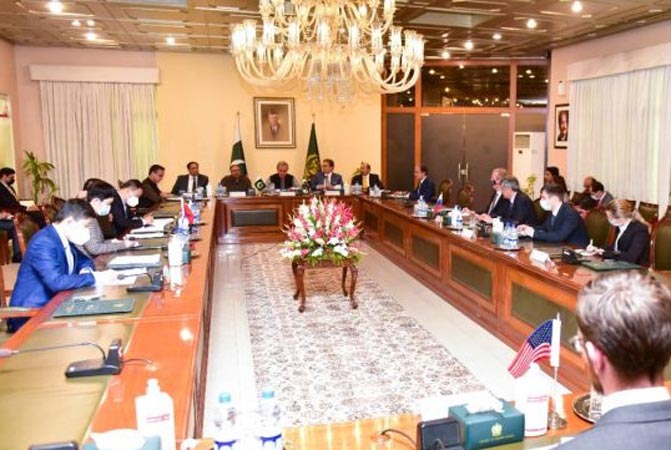 The countries participating in the Troika Plus meeting here Thursday called on the Taliban to take steps for an inclusive and representative government in Afghanistan besides agreeing to continue practical engagement with them to help achieve a stable and prosperous Afghanistan.

Afghanistan is “at the brink of economic collapse” and the international community must urgently resume funding and provide humanitarian assistance, Foreign Minister Shah Mehmood Qureshi warned as US, Chinese, Russian and Taliban diplomats met in Islamabad.

Qureshi spoke at the opening of the meeting, which included Thomas West, the new US special envoy for Afghanistan. The delegates also met Thursday with Taliban foreign minister Amir Khan Muttaqi. “Today, Afghanistan stands at the brink of an economic collapse,” Qureshi said, adding that any further downward slide would “severely limit” the new Taliban government’s ability to run the country.

After the meeting, a joint statement said the four nations had agreed to continue “practical engagement with the Taliban to encourage the implementation of moderate and prudent policies that can help achieve a stable and prosperous Afghanistan as soon as possible”.

But it also urged the Taliban to do more to create an inclusive government that provided equal rights and opportunities for women and girls to participate in all aspects of society.

Qureshi said it was “imperative for the international community to buttress provision of humanitarian assistance on an urgent basis”. That included enabling Afghanistan to access funds frozen by Western donors since the Taliban took control of the country in August, he added.

Resuming the flow of funding “will dovetail into our efforts to regenerate economic activities and move the Afghan economy towards stability and sustainability,” Qureshi said.

Doing so would also benefit Western countries, he argued in later comments to state media. “If you think that you are far, Europe is safe and those areas you imagine will not be affected by terrorism, don’t forget the history,” he said. “We have learned from the history and we don’t want to repeat those mistakes made in the past.”

In an audio message to Afghan media, Taliban foreign minister Muttaqi said the meeting had recognised efforts the new government was making. “They all are willing towards this cause and the efforts that are underway in Afghanistan in terms of making peace, eradicating crimes, and betterment of the Afghan government with each passing day,” he said. “All these were mentioned time and again by the group members during the meeting, and to provide support to these causes.”

The extended Troika met with senior Taliban representatives on the sidelines of the meeting, a joint statement said issued following the meeting. The participants expressed deep concern regarding the severe humanitarian and economic situation in Afghanistan and reiterated unwavering support for the people of Afghanistan.

They recalled the relevant Afghan – related UNSC Resolutions, including respect for the sovereignty, independence and territorial integrity of Afghanistan that was free of terrorism and drug related crime, and that contributes to regional stability and connectivity.

The Troika Plus “welcomed the Taliban’s continued commitment to allow for the safe passage of all who wish to travel to and from Afghanistan and encouraged rapid progress, with the onset of winter, on arrangements to establish airports countrywide that can accept commercial air traffic, which are essential to enable the uninterrupted flow of humanitarian assistance.”

The meeting also called on the Taliban to work with fellow Afghans to take steps to form an inclusive and representative government that respects the rights of all Afghans and provides for the equal rights of women and girls to participate in all aspects of Afghan society.

The participants also agreed to continue practical engagement with the Taliban to encourage the implementation of moderate and prudent policies that could help achieve a stable and prosperous Afghanistan as soon as possible.

They forum welcomed the international community’s urgent provision of humanitarian assistance to Afghanistan and expressed grave concern at the potential for an economic collapse and significantly worsening humanitarian crisis and a new refugee wave.

The meeting called on the Taliban to ensure unhindered humanitarian access, including by women aid workers, for the delivery of humanitarian assistance in Afghanistan to respond to the developing crisis.

The meeting welcomed the greater role of United Nations as a coordinator in such fields as contributing to stability and delivering emergency assistance.

They urged the United Nations and its specialized agencies to develop programs to implement the international community’s commitments to support the people of Afghanistan.

The body also condemned in the strongest terms the recent terrorist attacks in Afghanistan and called on the Taliban to “cut ties with all international terrorist groups, dismantle and eliminate them in a decisive manner, and to deny space to any terrorist organization operating inside the country.”

The troika Plus reaffirmed their expectation that the Taliban would fulfill their commitment to prevent use of Afghan territory by terrorists against its neighbors, other countries in the region and the rest of the world.

They also called on the Taliban to take a friendly approach towards neighboring countries and to uphold Afghanistan’s international legal obligations, including universally accepted principles of international law and fundamental human rights and to protect the safety and legitimate rights of foreign nationals and institutions in Afghanistan.