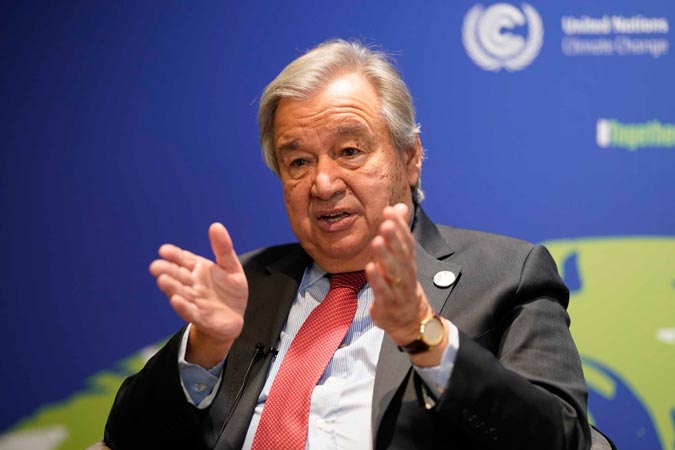 “The announcements here in Glasgow are encouraging — but they are far from enough,” he told the COP26 climate summit.

“Promises ring hollow when the fossil fuels industry still receives trillions in subsidies.” Two weeks of negotiations among nearly 200 countries are approaching a climax with a number of key issues still unresolved.

Guterres called on the governments “to pick up the pace and show the necessary ambition” to confront the climate crisis.

“We cannot settle for the lowest common denominator,” he said. “We know what must be done.”

The summit aims to advance global efforts in order to keep the Paris climate agreement’s aim of limiting temperature rises to 1.5-2 degrees Celsius within reach.

But nations’ latest decarbonisation plans as they stand will lead to 2.7C of heating this century, the UN says.

British minister Alok Sharma, the host president of COP26, warned that time was running short to clinch a deal before the meeting’s scheduled end on Friday evening.

“We still have a monumental challenge ahead of us,” he said, appealing to delegates to show more ambition.

If the UK presidency’s previous draft texts are adopted, “we would be able to say with credibility that we have kept 1.5 within reach”, Sharma added.

“Quite a lot has been achieved. But we are still some way away from finalising those very critical issues that are still outstanding,” the UK official stressed.