* Written by Farjad Nabi and Meenu Gaur, 'Qatil Haseenaon Ke Naam' is set in the timeless lanes of Androon Sheher — a mythical neighbourhood and showcases stories of love, lust 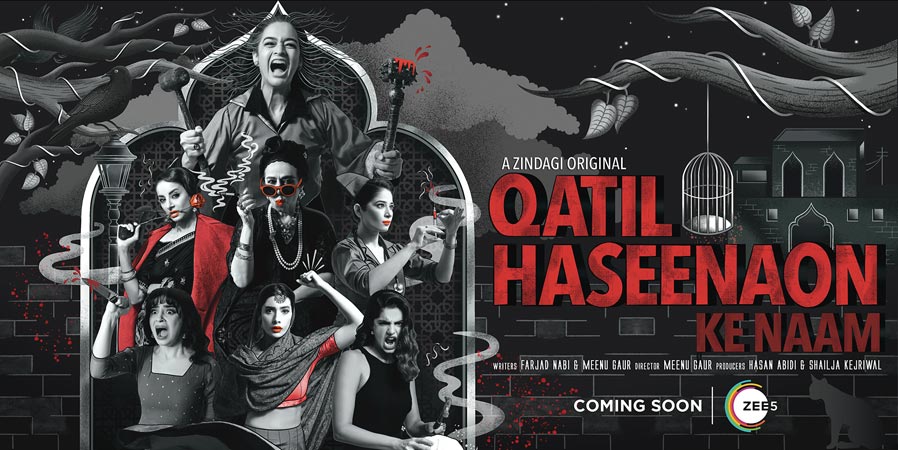 Women have often been celebrated for being an epitome of patience, sacrifice, endurance and more.

Written by Farjad Nabi and Meenu Gaur, Qatil Haseenaon Ke Naam is set in the timeless lanes of Androon Sheher – a mythical neighbourhood and showcases stories of love, lust, power and redemption woven in a web of betrayal, angst and revenge. Each story from the anthology depicts the fearlessness of women and their determination to avenge deceit. At the core of the stories is mystery, suspense, intrigue with twist endings.

Archana Anand, Chief Business Officer, ZEE5 Global, said, “After the success of the genre-bending Originals Churails and Dhoop Ki Deewar with Zindagi, we’re thrilled to bring a brilliant anthology under Qatil Haseenaon Ke Naam. As the foremost platform for South Asian content, we cherrypick stories from India, Pakistan and Bangladesh that will not only entertain audiences but also engage them at a deeper level. Qatil Haseenaon Ke Naam is one of those stories that’s not just about breaking stereotypes, but also creating new and powerful women characters who will be celebrated for their personalities.”

Talking about the series, Shailja Kejriwal, Chief Content Officer – Special Projects, Zee Entertainment Enterprises, says, “Qatil Haseenaon Ke Naam challenges the stereotypical portrayal of women who are often perceived as victims. Each story in the anthology showcases courageous, bold women who decide to take charge of things when their limits are pushed. These women are fatal to patriarchy and go several extra miles to seek what they want at any cost.”

Creator and Director Meenu Gaur says, “This idea for the show was like an outpouring for me and it’s no surprise that the stories here are about all that which surges within us as women – love, passion, ambition, conviction, rage, revenge, and revolution. With the dominance of a male-centric gaze especially in the noir genre, I was keen to explore a new interpretation, one which is told from the perspective of the much-maligned femme fatale characters. It is an attempt to correct the sexism of film noir and try our hands at feminist noir.”

Co-writer Farjad Nabi says, “Qatil Haseenaon Ke Naam waves goodbye to the victim woman as seven fatales get their way through methods that are unexpected, sometimes horrifying, but always liberating. I am glad this show will be premiering on the Zee5 platform that focuses on bringing diverse and significant stories for the global audience.”

Qatil Haseenaon Ke Naam is a compilation of six stories of seven women who wrestle back control and redefine the word femme fatale.